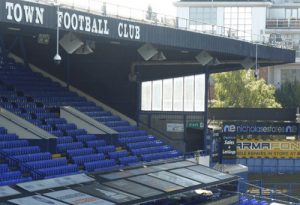 Before the 2019 season Ipswich Town Football Club was faced with an ultimatum: upgrade its CCTV system or risk not being able to play at its Portman Road home.

Portman Road is a 30,000-capacity venue, but without an upgrade to the stadium’s CCTV system, the club was informed it wouldn’t be able to commence the new season.

ClearView had maintained the club’s existing CCTV system for the past decade. During that period, it was agreed that the existing CCTV surveillance system had become outdated and was in need of an overhaul. The ability to increase recording capacity, as well as allowing for recording of higher quality and higher resolutions images, was a key consideration. ClearView provided Ipswich Town with upgrade options, but a lack of available funds meant these had to be put on hold until there was a budget for the technology investment.

The pre-season ultimatum naturally meant that a newly updated CCTV system was a priority, but ClearView had to deal with some major challenges presented by the stadium itself.

“Portman Road has four large stands, with the existing CCTV system utilising analogue coaxial cables that ran over the roofs of those stands,” said Paul Main, Strategy Director at ClearView. “The system we wanted to deliver Ipswich Town was based around the 8MP IP PTZ cameras from Hikvision. This was because the club needed the ability to deliver evidence-quality images for crowd monitoring and safety purposes. With that in mind, we had to devise a solution to ensure those IP images could be transmitted over long-distance coax cable.”

The solution was to utilise eight Hikvision 8MP Network Speed Domes positioned around the stands to monitor crowd activities and safety at all times. Crucially, they were able to send images over a conventional analogue coaxial cable.

The issue of transmitting images over the existing coaxial cable was also complicated by the extreme lengths of cable over the roofs of the stadium. Working at such heights is always tricky and investing in all new cabling was not a cost-effective option. ClearView opted instead to use HighWire Longstar products from Veracity. They offered the necessary high-speed Ethernet and power delivery over the long lengths of coaxial cable.

An additional seven Hikvision 2MP Turbo PTZ cameras were installed around the outer perimeter of the stadium, also monitoring crowd and safety conditions. Whilst not the 8MP resolution of the internal stadium PTZs, the quality of these images over the shorter distance being covered far exceeded the original analogue images and allowed the club to keep their costs within the budget.

An additional thirty-three 8MP Turbo Dome cameras were deployed throughout the Portman Road facilities, including outside the stadium covering surrounding buildings, and in various locations under the stands. These were for crowd monitoring in public areas such as bars, corridors and function rooms.

All the images are stored on 48TB of Seagate Skyhawk hard drives using three Hikvision Turbo HD recorders, all running Hikvision’s HikCentral video management software. These, together with three separate PC workstations, each allocated sixteen specified cameras, allow users to monitor the whole stadium during match days. Three 48-inch high-resolution wall-mounted monitors, each displaying 16 cameras, allow for continued overall viewing should an incident occur while one of the workstations is being used to focus on that situation.

ClearView Project Manager Lance Malkin said: “The system proved to be of value almost immediately. On one match day, a young man decided to set off a flare in the North Stand. Because of the high quality of the images the system captures, they were able to identify him from a camera positioned in the South Stand.”

Mick Warden, Match Day Safety Officer at Ipswich Town Football Club said: “The system has certainly gone a long way to ensuring fans attending matches at Portman Road can do so in a safe and secure environment.

“Our previous system was over 15 years old and was in urgent need of updating. Apart from being a key and reliable safety system, as one of the features, I was keen as Safety Officer, to be able to ‘drill’ down after an incident or event such as a missile thrown onto the pitch, for example, to be able to identify the offender. Suffice to say the Hikvision system, installed by ClearView, has met my expectations and we have had two occasions this season where offenders have been identified. We would have stood no chance with the previous system.”