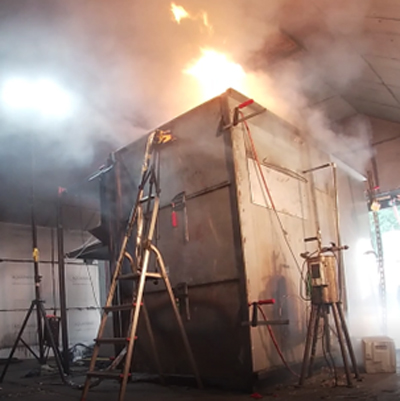 Wagner Rail, a subsidiary of Wagner Group, has developed a fire protection solution that extinguishes fires in open, highly ventilated technical areas in moving trains. The method for the effective extinguishing of fires in these train areas, even while the train is moving at high speed and without having to slow down or interrupt the journey, was developed on the basis of tests carried out in cooperation with TÜV Süd Rail.

An essential part of holistic fire protection solutions for rail vehicles is extinguishing fires in technical areas such as transformers, converters or diesel engines. These areas are usually equipped with several non-closable openings through which ventilation takes place. As a result, air currents are created inside these technical areas while the vehicle is in motion. For effective fire extinguishing, these air currents pose a major challenge. Until now, trains had to reduce speed or stop the journey completely to extinguish fires safely.

“In cooperation with TÜV Süd Rail and in compliance with the railroad guideline ARGE Part 2 ‘Fire fighting in railway vehicles’, we conducted an extensive series of tests from August 15th to 31st, 2022, in which fire scenarios were tested under various ventilation situations,” said Dr. Peter Stahl, Managing Director of Wagner Rail, explaining the research and development work for the process. “The aim of the tests was to completely extinguish fires in technical areas of the train while it was in motion. With the help of the test series, it was successfully demonstrated that simulated fires, which were fanned by driving winds and air speeds of over 100 km/h acting laterally on the train, were completely extinguished using aerosol extinguishing agents.”