Fire safety should be a primary concern for schools 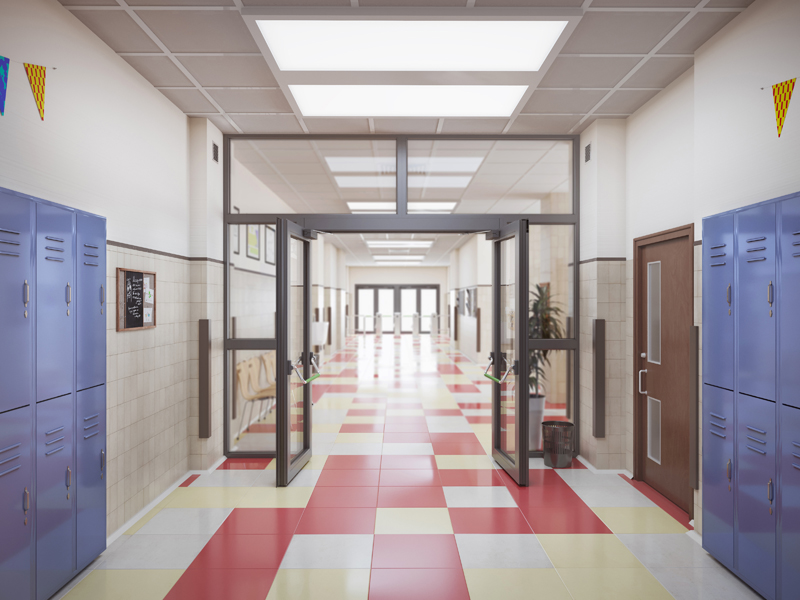 To protect pupils, staff and visitors, schools must adhere to stringent fire safety regulations. And with fire safety design standards under the spotlight, Karen Trigg of Allegion UK recalls the necessity of ongoing assessments and maintenance periods within school buildings.

The UK Fire Service is called out to extinguish fires in approximately 1,500 UK schools per year. Each year, these incidents – regardless of magnitude – disrupt the education of around 90,000 students, cause economic strain through physical building damage and, most significant of all, compromise safety.

In line with this, the government recently opened consultation on proposed revisions to its non-statutory fire safety guidance in schools. The Building Bulletin 100 (BB100), as it’s known, was first introduced in 2007 and gives thought to school building design, crucially advising on how to minimise the spread of fire and make the structure adequately resistant to fire.

Yet, the BB100 requires updating and simplifying. Many have raised concerns towards the guidance, specifically for “falling short” on active fire protection methods such as sprinklers – which in newly built school facilities have seen a reduction in installation from 70% in 2007 to around 15% today. With this renewed focus on legislation and schools back at full capacity, passive fire protection methods, such as fire doors and their hardware, must also be considered as part of a complete, fire safety package.

As the Department of Education seeks views on the revised BB100 reform, decision makers must be proactive in improving the fire safety standards within their own school buildings. Fires are unpredictable, beginning in and out of school hours and across various areas of the premises, too, from food tech rooms to chemistry labs where combustible materials are held. Arson is also a common offence, accounting for up to 70% of incidents in school environments for some local authority fire brigades.

In the event of a fire, should a school be considered unsafe or in breach of the Regulatory Reform (Fire Safety) Order 2005, it is in danger of receiving heavy penalties and fines. Not to mention the risk of a damaged reputation. To remain compliant, decision makers must approach fire safety as a continuous process, routinely managing all areas of fire safety within their facilities to be prepared for all contingencies.

This is demonstrated in the Regulatory Reform (Fire Safety) Order 2005, where it’s stated all workplaces must designate a Responsible Person (RP) to ensure their building is prepared in the event of a fire. Often, within education environments, this responsibility can be shared. In local authority schools for example, accountability can be shared between headteacher and the authority, and in private or independent schools, the responsibility often lies with the building owner. As part of their obligations, the RP must manage the ongoing compliance with fire safety legislation, while ensuring fire systems and procedures, including fire drills, are uncompromised. Additionally, the RP must possess a robust knowledge of fire safety to manage and perform regular fire safety risk assessments.

A fire safety risk assessment is designed to help identify the fire hazards within an educational premises. As part of the risk assessment, the RP must inspect everything from fire-fighting equipment and fire doors to staff training and pupil understanding towards the school’s procedures in the event of a fire. As highlighted by the Cheshire Fire and Rescue Service, a fire risk assessment consists of five steps:

Under the evaluation of risk stage, various areas of a school’s fire protection systems are assessed, including fire detection methods and emergency escape routes. Escape routes, for example, are fundamental in the event of a fire and rely upon passive fire protection methods, such as fire door sets, that will require ongoing assessment and maintenance.

Under The Fire Safety Order 2005, fire door sets in the education sector are a legislative requirement and form a critical role in providing a safer educational environment. Emergency exits conclude escape routes and should be assembled with ‘fire rated’ doors, which can be rated to FD30 or FD60, and will delay the spread of smoke and fire by 30 and 60 minutes respectively. As part of the risk assessment process, the correct location of all fire doors – whether FD30 or FD60 – is determined based on the risk of the area (FD60s are more likely to be installed in kitchen areas for example).

All fire doors should also be signed appropriately, with a British Standard sign attached to the face of the door on both sides for FDKS and AFDKC (1.5m from the floor). Above all else, they must operate as intended. In the circumstance of a fire, it’s vital that fire doors close fully independently, and their hardware – including hinges, handles, door closers, locks and signage – is correctly installed and maintained. Upon inspection of a fire door, the RP must review the certification, gaps, seals, hinges and the closing elements to ensure all is functioning appropriately. Passive fire protection is described as the backbone of fire safety, and so, in the event a fire door is identified as defective, it’s imperative that maintenance is carried out swiftly and professionally to retain the integrity of the escape route and compartmentation.

Fire doors and their hardware are just one element of a successful fire safety strategy, and thus one stage of a fire risk assessment. Yet, these simple, routine checks can help save lives and livelihoods. It’s true, fire safety is a significant responsibility, and it’s one that should never be overlooked.