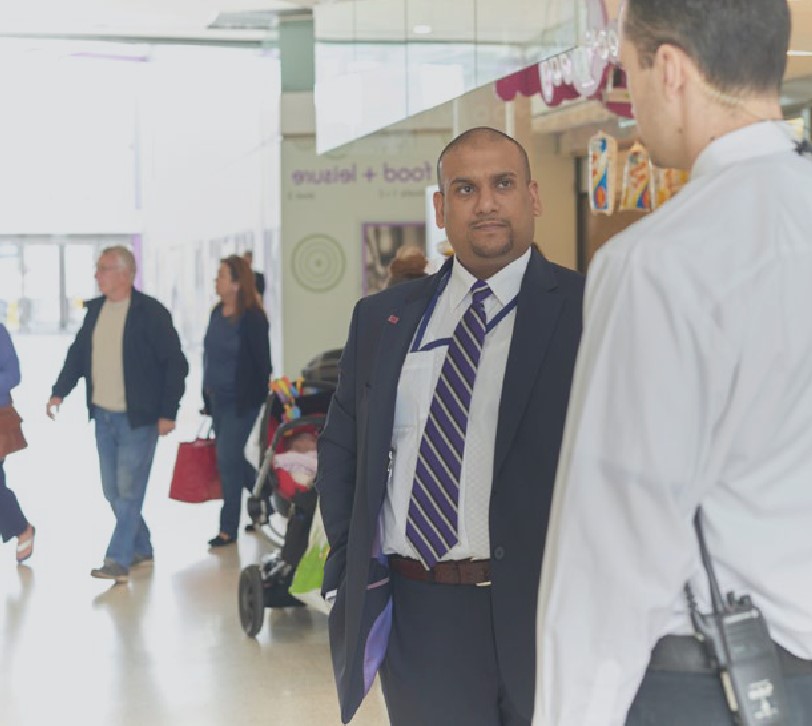 The Mercury Mall is an enclosed 188,000 square foot shop- ping centre in Romford. The Mercury is spread over three floors, and includes a Bingo hall, cinema and approximately 45 retail outlets and eateries.

The Mercury Mall was looking for a company to deliver an integrated cleaning and security service. As a progressive, environmentally-conscious and customer-centric shopping centre, it was crucial the company delivering these front-line services understood that a dynamic, multi-skilled service was essential.

Centre Manager, Spencer Hawken comments: “Since working with Axis, we have experienced a knowledgeable and friendly management team who understand our requirements without our having to explain details. It sounds like a cliché, but even during our first mobilisation meeting it was obvious to us that they knew how to deliver the customer-centric service that we required.”

On-site, the team consists of a contract manager, two deputy managers and one supervisor to oversee both the security and cleaning teams.

The Axis Security team is credited by the Centre Manager, Spencer Hawken, with maintaining a safe and welcoming environment for its elderly demographic as well as teens who visit at the weekend:

“The Mercury security team is a welcoming presence in Romford,” he says. “As knife crime moves East from London into our quiet suburb, we need to be vigilantly creating a safe environment. Thanks to our team’s dedication, we have been able to avoid the problems suffered by neighbouring areas.”

Axis Security’s approach to officer training is to utilise both SIA and conflict management training – providing the team with the skills and confidence to take a zero-tolerance approach to antisocial behaviour on site. This is coupled with The Mer- cury’s ‘community’ shopping centre centric vision to retain and nurture a youth presence within the centre, as Spencer explains:

“In addition to traditional security duties, the team takes an active role in our community. Officers have helped to set up and run a quarterly gaming league for teenagers, giving the officers an opportunity to show that they are approachable, that they are a friend, and not a threat to this vulnerable de- mographic.”

The Security team members are also fully trained in custom- er service, autism awareness and dementia. “This has led to the site receiving an autism friendly award in 2018,” says Spen- cer, “and undoubtedly contributes to the security team being the town’s most approachable and visible centre security team.”

The Security team members are also fully trained in customer service, autism awareness and dementia.“This has led to the site receiving an autism friendly award in 2018,” says Spen- cer, “and undoubtedly contributes to the security team being the town’s most approachable and visible centre security team.”

The shopping centre and surrounding area have been subjected to bouts of crime. On one occasion, Axis security officers foiled a plot to steal jewellery from a stand at the Mercury Mall. The thief was seen filling his pockets with goods and running from the scene when two officers managed to restrain the man and escort him to the police station.

Natalie Bays, Deputy Centre Manager of The Mercury, said: “We are extremely proud of the way the officers handled the situation, from identifying to stopping the thief. I am very pleased that our tenants are truly safe in our centre and humbled that we are actively doing our part in crime prevention in Romford.”

The Mercury’s crime figures from 2018 to 2019 show that the Security Team has reduced the number of anti-social behaviour incidents by 19 percent; with the number of assaults on site for the same period reducing significantly by 47%.

The Centre management reports that tenants are complimentary of the security team’s flexible and active approach and it is supportive of the wider community, with managers sitting on town ‘crime’ consortiums. The team also works closely with the borough’s ‘Safe and Sound’ initiative to improve town security links and have voluntarily taken the lead in town terrorism simulations.

Since winning the contract in 2018, Axis has introduced a patrol system. A key benefit of this software is that both security and cleaning teams can use the same system to track activities, record incidents, and provide detailed reports. A single software solution that allows the Mercury Mall and Axis to follow the progression of officers and cleaning operatives, reduce manual tasks and lower costs.

The Axis Security team has been praised for being highly professional and ap- proachable, with their ongoing contribution to the community and approach to zero tolerance on anti-social behaviour continuously making a real difference to the people who visit and work in the shopping centre.

The teams’ positive impact on the site was recognised at the 2019 Sceptre Awards when they were awarded ‘Security team of the Year.’