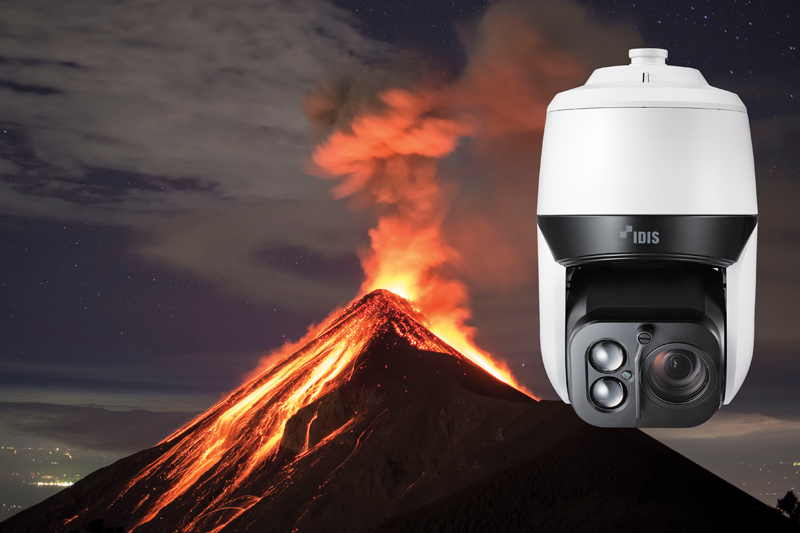 IDIS video technology is being usedin one of the toughest and most dramatic applications: 24/7 monitoring of volcanic activity at Guatemala’s Volcan de Fuego.

This volcano, one of the world’s most active and dangerous, is now watched day and night in order to give early warning of impending eruptions. Continual live footage can be viewed online by emergency agencies, scientists and residents, all captured by the 8MP 31x IR PTZ camera.

Even from over nine miles away, the 8-megapixel model is providing full day and night surveillance of the active caldera, showing sudden gas and ash eruptions as often as every 15 to 20 minutes. Video monitoring alongside data from sensors including seismology and gas detectors aims to protect vulnerable communities living around the volcano by giving early warning.

Like all IDIS cameras, the model benefits from one-click plug-and-play set up, making it ideal for hassle-free installation at height, in challenging environments, and in locations where engineers are exposed to increased risk.

The IDIS PTZ also features true wide dynamic range (WDR), allowing it to cope in changing lighting conditions; electronic image stabilisation (EIS) ensures steady coverage of scenes at distance, so images from the volcano remain crisp and sharp; and H.265 and intelligent codec requires minimum bandwidth even for 4K live monitoring.  The camera also remains stable despite the region’s variable weather conditions, including under strong sun, and when temperatures that fall sharply at night.