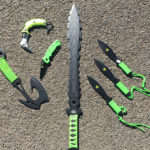 An amendment to the Criminal Justice Act 1988 will ban the sale, manufacture, rental or importation of knives often referred to as ‘zombie knives’, ‘zombie killer knives’ and ‘zombie slayer knives’. The ban comes into effect on Thursday 18 August.

These knives can have cutting blades of up to 25 inches, include a serrated edge and harbour images or words that glamorise violence.

During 2016, 13 police forces have undertaken co-ordinated action against knife crime, with further weeks of action planned for later this year. The co-ordinated response by the police has resulted in 401 arrests, 2,111 weapons being taken off the streets and the targeting of habitual knife carriers as well as weapon sweeps, test purchases of knives from identified retailers and the encouraged use of surrender bins.

Sarah Newton, the Government’s Minister for Vulnerability, Safeguarding and Countering Extremism, said: “This Government will act wherever necessary to cut crime and keep our communities safe. ‘Zombie killer knives’ glamorise violence and cause devastating damage. They have no place whatsoever in our society.”

Newton added: “We committed to banning the sale, manufacture and importation of these dangerous weapons. With the ban now becoming law, we’re delivering on our commitment. Anyone caught making or selling ‘zombie knives’ now faces up to four years in prison.”

No place for knife crime

Chief Constable Alf Hitchcock, the National Police Chiefs’ Council’s Lead for Knife-Enabled Crime, said: “‘Zombie knives’ are absolutely horrific weapons. Forces are determined to reduce the harm caused by these and all other dangerous weapons. There’s no place for knife crime within society. This new ban is a further commitment to keeping communities safe.”

Following discussions between the UK Government and the Northern Ireland Executive, Minister of Justice Claire Sugden has confirmed she will take forward the necessary action to create legislation aimed at banning ‘zombie knives’ in Northern Ireland.

The Home Office will communicate the ban in England and Wales to front line border officers, while Border Force officials will continue enforcing the law around the importation of dangerous weapons – including ‘zombie knives’ – into the UK.