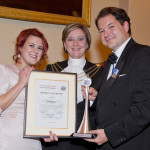 Left to Right: Zoe Brown, Dr Christine Rigden (Sheriff of The City of London) and Stuart Seymour CSyP (Master of The Worshipful Company of Security Professionals 2015-2016)

The 2015 City of London Sheriffs’ Award for Bravery* was presented to Ms Zoe Brown on Monday 12 October by Dr Christine Rigden, the Sheriff of The City of London. The presentation ceremony took place as part of the Annual Dinner of The Worshipful Company of Security Professionals, held at The Plaisterers’ Hall, One London Wall.

In conjunction with Sir David Brewer (a former Lord Mayor and later Lord Lieutenant of London), the award scheme was launched by The Worshipful Company of Security Professionals following the London Underground and bus bombings of July 2005.

On an annual basis, The City of London Sheriffs’ Award now duly recognises outstanding acts of bravery by individuals from right across the UK who, without any thought for their own safety, act diligently and effectively to confront danger in a selfless and inspirational manner.

As has been the case in previous years, The Worshipful Company received a substantial number of high quality nominations in 2015. Following rigorous review by The Worshipful Company’s representatives and the Sheriffs of the City of London, the unanimous decision was made to award the 2015 prize to Ms Zoe Brown from Manchester.

Citation for the 2015 winner

“At 1.45 am on 1 January 2015, Zoe and her partner Matthew were at home with their baby. Zoë’s attention was drawn to a male banging on the window of an address close to her own abode. The male in question was attempting to climb through an open bathroom window and appeared to be shouting to his partner to let him in.

“The male claimed that he was locked out of his flat and asked for a screwdriver. The male eventually managed to gain access. Almost as soon as he had entered the property, Zoe and her partner heard a disturbance and the sound of a female screaming. The screams gradually became louder and louder and more desperate.

“Zoe approached the house and peered inside. At this point, she saw a female being dragged by the hair along the hallway by a male. The female was screaming and shouting and appeared to be in a great deal of pain. Without any thought for her own safety, Zoe ran into the address and pushed the male away from the female, who at this point was lying on the floor. Zoe helped the female to her feet and began to lead her to safety when she saw the male return to the scene brandishing a three-inch kitchen knife.

“The male threatened to stab Matthew with the knife and, without provocation, lunged at him. At this point, and again demonstrating no regard for her own personal safety, Zoe lunged at the male and forced him to the ground.

“Zoe and Matthew then managed to restrain the male and remove the knife from his possession. The male returned to his flat and emerged moments later holding a stainless steel object that was around one foot in length. He continued to shout and threaten Zoe and Matthew, who were now in their flat. He then smashed one of the windows before running back to his flat just as the police arrived at the scene.

“Zoe put her own life on the line to apprehend a knife-wielding offender and protect her loved ones. Her actions undoubtedly saved Matthew’s life. She had the courage to stand up for and protect a vulnerable victim from domestic violence and prevented any further serious harm to the woman being perpetrated by her violent partner.”

As part of this unique award, Ms Brown receives a cheque for £2,500. Her name will now be inscribed on an Honours Board and placed in a Book of Honour which are both to be found on permanent display within the Central Criminal Court at The Old Bailey.

About The Worshipful Company of Security Professionals

The Worshipful Company of Security Professionals is one of the 110 Livery Companies of The City of London. The Company is a membership and charitable organisation providing support to the wider education community and welfare services to the security sector.

Membership of The Worshipful Company is drawn from all security organisations within the UK, including leading security professionals from the industrial and retail sectors, serving and retired members of the police service and the Armed Forces, security consultants, academics, heads of security for corporate businesses, investigators and representatives from electronic surveillance companies.

*The City of London Sheriffs’ Award for Bravery is launched in February each year, with the winner selected by the Sheriffs in September. This popular and highly prestigious award scheme is open to nominations from the general public, the business community, the Emergency Services and the Armed Forces. To ensure your nominee receives the recognition they deserve in 2016, visit The Worshipful Company of Security Professionals’ website at: www.wcosp.org for further details