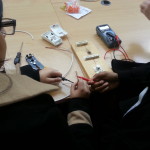 Skills for Security’s Workshop proved to be a huge success

Earlier this month, a group of 16-18 year old female students attended a Security Workshop at Skills for Security’s Training Centre during which they were introduced to the security sector and career options that it has to offer.

The Security Workshop in Birmingham proved to be a great success. At the beginning of the day only one student was interested in a career in the security sector but, come the end of the day, 90% of the students in attendance were stating that the security industry would be a good career choice and a definite consideration for them.

Throughout March and April 2015, Skills for Security is working with local schools to deliver a series of Security Workshops as part of the Skills Funding Agency Equality and Diversity Fund. As stated, the main aim is to highlight the security industry and careers within it to female students. A second desire is to gain feedback about their views on the industry in order to develop a mentor programme and produce a Best Practice ‘toolkit’ for employers, schools and training providers that will assist them in attracting and retaining females into the industry.

The majority of students attending the Security Workshop reported that they hadn’t considered the security sector as a career choice as they feel it’s male dominated and fear they’ll not ‘fit in’.

Student comments on the day were as follows:

“Today has given me a greater ambition about working in the industry as I have learned there’s a lot more to it than just being a bodyguard.”

Terri Jones, director general at Skills for Security, commented: “As a new entrant to the security sector I too was unaware of the breadth of opportunities available. We’ve developed a range of progression pathways designed to promote individual careers to schools and ensure that girls are considering jobs ranging from security guarding through to the development of biometric security systems.”

Jones added: “The Security Workshop consisted of an introduction, two practical sessions and a guest female speaker from the security industry. It resulted in great feedback from the students. In a short space of time, members of the Skills for Security team present on the day were able to address many of the misconceptions the students had about the industry and really emphasise that there’s a huge array of career opportunities available.”

Skills for Security’s new trailblazing Employability Programme kicked off earlier this month in what has been a “spectacular start” with the first sessions fully-booked and further applications being made on a daily basis.

The Employability Programme takes unemployed people through a six-week course which gives them the skills required to enter the security industry. It teaches delegates interview skills, customer service skills and security-specific knowledge culminating in an interview with an employer who’s looking to recruit.

Derek Jones, national employer engagement manager at Skills for Security, stated: “The first sessions have been a roaring success. The candidates have demonstrated a superb attitude and a real commitment to learn. We’re on target to have a full house completing the qualification and ready to impress at the interview stage. The recruiting employer has expressed their delight with both the standard of the learners and with the course content itself.”

Skills for Security’s Employability Programme originated following discussions with the security industry about how to attract new talent into the sector and the difficulties being faced in recruiting high quality candidates.

The aim is to provide employers with a selection of individuals who are ‘job ready’, engaged, motivated, knowledgeable and possess a strong work ethic.

Jones continued: “The Employability Programme was developed in conjunction with employers. They advised on the standards and skills they look for when recruiting and the course was tailored accordingly while still using nationally-recognised qualifications. We’re currently in discussions with other security companies and have a further two programmes in the pipeline proposed for London and Birmingham. However, we’re able to deliver anywhere in England that has a need for security personnel just as long as the partnership between the employer and ourselves develops the learning aims for the individuals involved.”

*If you would like to know more about the Employability Programme or forthcoming opportunities, or you’re an employer who’s looking to develop a bespoke recruitment or training  process, contact Skills for Security on (telephone) 01905 744000 or e-mail Derek Jones: derek.jones@skillsforsecurity.org.uk