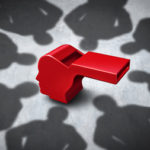 BDO LLP states that the total number of whistle-blower reports to the Financial Conduct Authority (FCA) has risen by 24% in the last year to attain an overall figure of 1,755 for the year ending 31 December 2018. That’s up from 1,420 in 2017.

There was a 105% increase in the number of whistle-blower reports relating to allegations of market manipulation. The increase in whistle-blower reports in this area will be a concern. Financial services firms have been trying hard to stamp out any risk of market rigging or collusion following the high-profile Libor and Forex rigging scandals that broke in 2013 and resulted in heavy fines for a number of banks.

Other areas of the financial services industry which have seen significant increases in whistle-blower reports include:

BDO says that part of the increase in whistle-blower reports is coming from the financial services industry itself. This is encouraging as it suggests the industry is making a far better success of self-policing.

In addition, individuals and firms are under more pressure to whistle-blow after the introduction of significant new regulations from 2016, such as the Market Abuse Regulation and the first round of the Senior Managers and Certification Regime (SMCR). The SMCR was introduced in March 2016 and makes senior managers at financial services firms responsible for any wrongdoing in such businesses. The SMCR also requires them to take reasonable steps to prevent misconduct, which BDO believes may have led to the increase in whistle-blower reports.

The SMCR currently applies to only 8,000 financial services businesses, although it’s due to be extended to another 55,000 firms by the end of 2019.

Andrew Jacobs, partner at BDO, commented: “Individuals in financial services firms are taking more personal responsibility to identify and root out malpractice. Whistle-blowing is now expected practise in firms following the introduction of new rules. The planned extension of the SMCR was muted by regulators months prior to confirmation of the implementation date. As a result of this planned regulation, the Libor scandal and a number of high-profile regulatory sanctions, many have already started to embrace higher standards of accountability and responsibility ahead of the final extension of the regime.”

Jacobs added: “Regulations such as the SMCR, the EU Market Abuse Regulation and the General Data Protection Regulation have placed a heavy burden on senior executives to promote and embed the right culture. They now know that they cannot turn a blind eye to misconduct. It has come into sharper focus that the FCA has the power to suspend and ban individuals who don’t properly report poor behaviour. The FCA will use these powers.”

In conclusion, Jacobs stated: “It’s also interesting to observe that the main areas where whistle-blowing reports have increased, namely financial crime and data security, directly correlate to FCA objectives in respect of appropriate protection for customers and enhancing the integrity of the UK financial system.”

*‘Treating Customer Fairly’ relates to the FCA’s ‘Principles of Good Regulation,’ which include financial services firms having to pay due regard to the interests of their customers

Is the Serious Fraud Office Offering Value for Money?