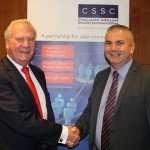 The hugely successful Cross-Sector Safety and Security Communications (CSSC) initiative – a partnership between law enforcement agencies, local and national Government organisations and private sector businesses that operates under charitable status – has appointed David Ward (managing director of Ward Security) to the position of chairman for its Southern Region.  The newly-created CSSC Southern Region will cover Kent, Surrey, Sussex and Hampshire.

Operating across a wide range of sectors, the CSSC aims to help businesses remain safe and secure by providing information that will assist them to develop robust resilience and emergency preparedness plans. This is achieved by delivering accurate, timely and authoritative messaging and information on an ongoing basis and in times of major incidents.

In 2013, the CSSC – which was energised in readiness for the London 2012 Olympic and Paralympic Games – received the Best Contribution to Continuity and Resilience Award at the CIR Business Continuity Awards.

“We’re delighted to have David Ward on board as chairman of the newly-formed CSSC Southern Region,” explained Don Randall MBE, chairman of the CSSC initiative. “His vast experience and deep understanding of the need for effective security across both the business and public sectors will be a huge benefit in helping to further establish CSSC within the community and oversee the initiative’s implementation.”

Randall also told Risk UK: “The original success of CSSC in London and Scotland proved the concept could be highly effective. Its subsequent expansion into East Anglia illustrated how, with the right people in place, the initiative can be applied to different areas with great effect. The setting up of a Southern Region is the logical next step in the further expansion of the scheme. We’re looking into setting up other regional schemes.”

David Ward added: “The CSSC initiative is a crucially important way of bringing together stakeholders to maximum effect and I’ve been very impressed by the results of the London, East and Scottish schemes. As well as delivering a truly holistic security intelligence, communications and response infrastructure, CSSC succeeds in delivering the all-important feeling of ‘security’ within the community which cannot be understated.”

In conclusion, Ward stated: “I look forward to working with partners and stakeholders alike and helping to ensure that CSSC is as effective within the Southern Region as it has already been elsewhere.”

As stated, the CSSC Southern Region encompasses Kent, Surrey, Sussex and Hampshire. For more information or to register your business visit: http://www.vocal.co.uk/cssc/