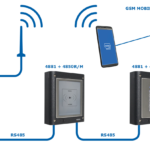 Access control solutions developer Videx has added new features and functionality to its GSMPRO intercom system that provide end users with much greater freedom and security. The GSMPRO, which is now expandable to an eight-door access control system, enables individuals to answer calls at their premises from their mobile phone or landline, such that they never have to miss that important visitor and are made aware of who has visited even when they’re not on the premises.

The GSMPRO is now available with an integrated backlit coded keypad with up to 400 access codes and 32 temporary codes which can be programmed to expire after a number of hours. Codes can also be programmed via PC software and remotely via SMS, thereby enabling greater flexibility. A new app is also available for both Android and iOS which simplifies the process of sending SMS messages.

Commenting on the new features, Neil Thomas (national sales manager at Videx UK) said: “Our new generation GSMPRO now boasts many more features which makes it an ideal access control choice for a greater range of businesses and organisations. For example, it now has free access time bands enabling users to set up to ten time periods where the entrance is held open for specific hours of the day and on specific days of the week. It’s also now an eight-door access control system, with the ability to add up to seven extra keypad or proximity access entrances. Additional entrances connect back to the GSMPRO via an RS485 bus using standard Category 5 cable.”

Many of the new features have been the result of special requests from customers which have been found to be good additions to the system and have allowed the GSM range to be used on installations with complex requirements.

Thomas continued: “A great new feature is that the system now carries a new remote event log that can be accessed online (www.videxevents.co.uk), allowing events to be viewed in real-time on the move via a phone, tablet or laptop. It’s a great security feature because it’s where a record is kept of calls, gate/door openings and much more. What’s also useful is that alerts can be programmed. An e-mail will be sent should that alert be triggered. For example, if the gate or door is opened out of normal hours then any such unusual activity is flagged.”

There are several new programming commands included to make the system very easy to set up and simple to use. For example, it’s now possible to program all of an apartment’s telephone numbers (primary and divert numbers) in a single SMS message and program up to five dial to open numbers in a single SMS.