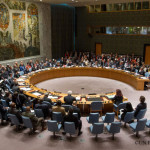 The United Nations Security Council Ministerial Briefing on Foreign Terrorist Fighters has called on Member States to increase reporting of information to – and their use of – Interpol’s databases to help identify, monitor or prevent the transit of foreign terrorist fighters

Addressing the United Nations Security Council ministerial briefing on foreign terrorist fighters, Interpol Secretary General Jürgen Stock has stated that countries need to “share even more information, and share it even better”. Stock told the high-level meeting that more countries are realising that sharing detail via Interpol represents an opportunity rather than a risk which, in turn, enables the world policing body to more closely monitor the terrorist threat as it evolves.

Stock added that other emerging patterns include a growing number of recruits with criminal records, particularly from Europe, and the active domestic terrorism role played by some suspects who had been prevented from travelling abroad.

Chairman of the 1373 Counter-Terrorism Committee, Ambassador Raimonda Murmokaité of Lithuania (which organised the briefing as part of the nation’s Security Council presidency), explained that priorities identified by the Committee include the centralised and co-ordinated exchange of law enforcement information at the national level.

Unprecedented threat “from the outset”

Underlining Interpol’s unique global reach in terms of law enforcement co-ordination, Secretary General Stock highlighted the ability of each its 190 member countries to choose with whom they share information.

He added that, where successful interventions by Interpol member countries have been achieved, they’ve embodied two elements of success: the secure sharing of information on foreign fighters through Interpol and access to that information at the front lines. 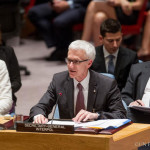 “The ease, speed and reach of the foreign terrorist fighters converging on Syria and Iraq showed the threat was unprecedented almost from the outset,” explained Stock. “Withholding information within any region simply puts the rest of the world at risk. Intelligence is crossing borders, but at a much slower pace than the foreign terrorist fighters.”

A Security Council Presidential statement issued at the end of the meeting calls on Member States to increase their reporting of information to – and their use of – Interpol’s databases to help identify, monitor or otherwise prevent the transit of foreign terrorist fighters.

The Security Council has also called on the international community to help strengthen Interpol’s capabilities and to develop capacity-building assistance designed to facilitate the broader use of its secure communications network as well as increased reporting to the Stolen and Lost Travel Documents database.