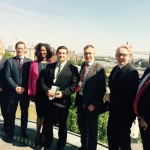 Security solutions provider UniTrust Protection Services has presented Val Trifinov, one of the company’s many dedicated security officers, with a Special Recognition Award for his actions while working on an assignment at the ‘Cheval 3 Quays’ luxury apartments development next to the Tower of London.

One afternoon, Trifinov witnessed a confrontation taking place between a woman and a man immediately outside the location and, believing the female to be distressed, went to investigate. It quickly became apparent that the man had stolen a purse belonging to the victim.

Satisfied that an arrestable offence had been committed, Trifinov made a citizen’s arrest, ensuring that the victim and a witness to the incident were looked after separately while he waited for the City of London Police’s officers to arrive on scene. The suspect was subsequently arrested.

On his own initiative, Trifinov interrogated images captured by the location’s CCTV system and was able to provide further intelligence and hard evidence to the police which was essential to assist in the arrest. It transpired that the assailant was part of a Romanian criminal gang responsible for similar offences in the City and West End of London.

The police officers attending the scene were very grateful for Trifinov’s actions and intervention. It was pointed out that: “Ordinarily, most security personnel choose not to become involved in matters not directly affecting the premises at which they work. Val was the opposite, and chose to help. This partnership approach is without doubt the way forward. Helping your neighbouring premises, sharing information and acting to keep the area safe is without doubt key to improving the local environment from a law enforcement perspective.”

George Westwell, director of Cheval Residences, added his appreciation and was pleased that, although the victim was not a resident of ‘3 Quays’, that could very easily have been the case.

UniTrust’s managing director Ian Yexley commented: “Val’s previous police background in Latvia shone through here. He identified a crime, took control of the situation, dealt with it confidently and, using his own initiative, carried out further investigations to provide more evidence which enabled further charges and intelligence sharing. We’re all very proud of Val. In addition, the support from the City of London Police in this matter clearly shows that they recognise his efforts and commitment to the cause.”

Trifinov was recognised by the police service and UniTrust’s management for his courageous actions. In his acceptance speech, this skilled security officer said: “I was just doing my job” and went on to thank the UniTrust management team for their support.

A Canadian tourist, the victim in this scenario was also most appreciative to the City of London Police and Trifinov for their interventions which meant that she could continue with her holiday. However, she was unaware that UniTrust also provides the security services at the Canadian High Commission and Embassy in the heart of London. It’s a small world!