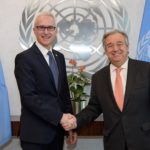 With an increased risk of foreign fighters returning home or joining other conflicts following the liberation of Da’esh-held territories transforming the global threat landscape, international security was necessarily high on the agenda during recent discussions held between the heads of the United Nations and Interpol.

In their first meeting, Secretary Generals António Guterres (of the United Nations) and his counterpart at Interpol, namely Jürgen Stock, addressed areas of common concern where the two organisations can further streamline and strengthen their co-operation for the benefit of their respective member countries.

Areas for enhanced collaboration have been identified in a number of UN resolutions, including protecting critical infrastructure and preventing foreign terrorist fighter travel as well as combating all forms of transnational crime such as maritime piracy, human trafficking and drug smuggling.

In addition, there are currently nearly 600 valid Interpol-UN Special Notices for entities and individuals who are the targets of UN Security Council Sanctions Committees.

“We are all too well aware of the threats which face us and, for the foreseeable future, these threats are increasing rather than diminishing,” asserted Stock. “The partnership between Interpol and the UN provides a unified response in supporting law enforcement and the maintenance of international peace and security.”

Among the tens of millions of pieces of data held in Interpol’s global databases and accessible to law enforcement across its 192 member countries are more than 43,000 foreign terrorist profiles.

In 2017, law enforcement officers around the world conducted some 4.5 billion searches against Interpol’s databases resulting in one million ‘hits’, with each match potentially a key element in an investigation.

Interpol has a long history of co-operation with the UN which was formalised in a 1997 agreement. The Office of the Special Representative of Interpol to the United Nations in New York was opened in 2004 and has since further strengthened the relationship between the two organisations.