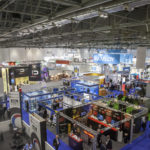 UBM EMEA, the organiser of IFSEC International, has announced the launch of a new “show within a show” dedicated to border security, counter-terrorism and the protection of Critical National Infrastructure.

Borders & Infrastructure, which takes place between 20-22 June 2017 as part of IFSEC International and UBM’s wider Protection & Management Series, will feature products, solutions and “visionary content” aimed at practitioners operational within central and local Government, transport and the utilities, sports stadiums and events, logistics, border security and the law enforcement sector, offering a significant addition to the usual array of products and services on view at what is Europe’s largest security trade show.

Speaking at the launch event held at London’s Guildhall, IFSEC International’s brand director Gerry Dunphy outlined the reasoning behind this addition to the line-up. “The heightened terror landscape, unprecedented migration levels and the growing cyber threat mean that demand is huge for a show like Borders & Infrastructure,” explained Dunphy. “Cyber security, counter-terrorism, border security and protecting the critical infrastructure are very near the top of the priorities lists of Governments in Europe and, indeed, around the world.”

Dunphy added: “In view of the existing broad horizon of security products on offer at IFSEC International, Borders & Infrastructure will richly enhance the event’s position as the security sector’s industry-defining event for the UK and Europe. Borders & Infrastructure will take IFSEC International to an even higher level when it comes to providing deeply enriching and strategic security solutions for major customers.”

Attended by a wide range of manufacturers and customers including representatives from the Home Office’s Security Industry Engagement Team, guests at the launch event heard Keynote Speaker Sir David Veness CBE (former UN Under-Secretary General for Safety and Security and current chairman of London First) preview the findings of a London First report into the potential impact of Brexit on the security and resilience industries. There was also an address from the BSIA’s director of people, Trevor Elliott, who welcomed the new addition to IFSEC.

Security and risk management professionals can sign up to an exclusive VIP 1-2-1 meetings service – free of charge – which matches them with potential suppliers, partners or customers.

Borders & Infrastructure event will serve as a hub for senior decision-makers from key verticals as well as Government and the law enforcement world to strike major deals in procurement and supply contracts. The new event will feature everything from airport security-focused technology through to physical perimeter protection and even drones (the new area will incorporate the Drone Zone, which returns to the show for a second year).

UBM’s group director Simon Mills stated: “The strategic addition of Borders & Infrastructure to IFSEC International represents an historic moment in the 30 year-plus development of the IFSEC brand. It should be viewed as something very different to the show’s more traditional elements.”

Borders & Infrastructure has the support of the BSIA, ASIS UK, BRE Global and The Security Institute.