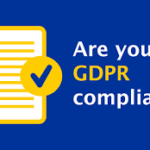 TrustArc, the data privacy management company, has announced the results of a comprehensive survey conducted by Dimensional Research that gauges the status of General Data Protection Regulation (GDPR) compliance among UK, US and EU (excluding UK) companies one month after the European Union’s 25 May deadline.

Key findings from the research highlight that only 20% of companies surveyed believe they are GDPR compliant, while 53% are in the implementation phase and 27% have not yet begun their implementation.

“At TrustArc, we’ve been working with companies of all sizes globally such that they can become GDPR compliant by helping them to understand the requirements and deploy technology solutions aimed at supporting their compliance and risk management objectives,” said Chris Babel, CEO of TrustArc. “While the amount of effort was immense for the deadline of 25 May, there is substantive work yet to complete to achieve initial compliance as well as monitor and maintain compliance on a repeatable and efficient ongoing basis.”

While many companies still have a long way to go, a comparison with August 2017 research shows significant progress being made in the past ten months. The number of companies whose GDPR implementation is under way or completed has increased from 38% to 66% in the US and from 37% to 73% in the UK.

Cost of compliance is high

Meeting customer expectations (57%) appears to be the main driver for becoming compliant with the EU’s new GDPR, which is significantly higher than concern over fines (39%). The complexity of the GDPR poses the biggest challenge in terms of compliance.

87% of respondents have indicated that data privacy is now more important post-GDPR deadline, with 80% of companies planning to increase their spending on GDPR technology and tools to maintain compliance.

*The study was conducted online between 4 and 15 June and involved 600 IT and legal professionals with responsibility for privacy at companies required to meet the GDPR compliance, split equally among the UK, the US and the EU. Privacy was either the entire job or represented more than 25% of the job for each respondent. Although all key industry sectors were represented among the respondents, the four top industries represented were technology, financial services and insurance, manufacturing and retail.