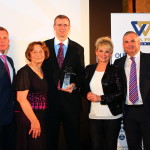 Security guarding specialist Ward Security has announced its top performing employees of the year at its annual Employee Awards Ceremony. From its 640 strong team, Ward Security presented nine employees with a PRIDE Award in recognition of their commitment, loyalty and outstanding achievements during 2014.

Each award represents a PRIDE core value of the company: Protection, Respect, Integrity, Dynamic team and Excellence. Site manager Daniel McClendon won this year’s coveted Employee of the Year Award which was presented by Elizabeth France CBE, chairman of the Security Industry Authority.

McClendon, who has been an employee at Ward Security for four years and works on the contract at the prestigious 100 Wood Street premises in London, was described at the ceremony by clients and colleagues as someone “who has a positive ‘can do’ attitude and is very approachable”. Indeed, he’s viewed as a real asset to the team with his helpful and polite attitude, playing a key role in training new people on the team.

David Ward, managing director of Ward Security, commented: “We always look forward to these awards with a great sense of pride and satisfaction. We’re delighted to host this evening as a Thank You and in recognition of the outstanding members of the team here at Ward Security. Such is the quality of our team members that this year’s winners were harder than ever for the Judges to decide upon. Congratulations to all of our worthy winners in 2015 and to Daniel McClendon, who truly represents our company PRIDE values.”

These are the eighth annual Ward Security Employee Awards and the culmination of the quarterly employee awards which staff are entered into throughout the year.

The 2015 awards ceremony took place on Friday 7 August at The Grange City Hotel in central London.

The full list of 2015 winners and the contracts upon which they work are as follows: