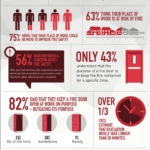 Care homes, where some of the most vulnerable people in our society reside, are believed to be at an alarming risk of a fire, with three-in-five care home workers admitting to “serious concerns” according to new research released to coincide with Fire Door Safety Week 2019 (which is running from 23-29 September).

The study, which was conducted among 1,000 current and former care home employees, found that three-quarters of them believe more could be done to prevent or manage a fire, with three-in-five workers having reported fire safety concerns. Half (51% to be exact) say that unsatisfactory action was taken as a result.

There’s also a worrying lack of clarity among care home workers around one of the key lines of defence in the event of a fire: fire doors. Nearly half (47%) said they didn’t understand the role a fire door plays in keeping a fire contained for a specified time, while over eight-in-ten (82%) admitted to deliberately keeping a fire door open, thereby defeating its purpose.

Revealing some worrying misconceptions over fire door safety, one-in-five care workers incorrectly believed that painting a regular door with flame-proof paint made it a legitimate fire door, with the same proportion stating that the gap between the fire door and door frame doesn’t matter.

Alarmingly, almost three-quarters (72%) said they had witnessed (or were aware of) fire doors being tampered with, including removing the door closer to make doors easier to open. Not only does this make the door closer redundant, but when combined with other adjustments it could leave the fire door not fit for purpose in the event of a fire.

Fire doors placed on the market should withstand fire for 30 minutes and have test evidence to validate this. Respondents said that, on average, that it would take 25 minutes to evacuate the care home where they worked, with a quarter saying that it would take longer than 30 minutes. This highlights the vital importance of fire doors in holding back fire and smoke for this amount time.

This year, Fire Door Safety Week focuses on the role that fire doors play in protecting people while they’re asleep and at their most vulnerable – principally in specialised housing such as care homes, children’s homes and sheltered housing as well as houses in multiple occupation and communal properties.

Helen Hewitt, CEO of the British Woodworking Federation which organises Fire Door Safety Week, said: “These highly concerning findings underline how crucial fire safety is, and the fundamental role that fire doors play – especially so in light of recent instances of damaging care home fires which have threatened the lives of residents. Evacuation strategies in care homes are very specialised, accounting for the fact that many residents will need assistance. These strategies rely on the ability of fire doors to perform their function in holding back fire and smoke to allow adequate time for rescue.”

Hewitt added: “We all need to feel protected inside buildings, and especially so when we’re asleep. Care homes and other specialised housing provide a living place for some of the most vulnerable people in our communities. The companies and other operators that run and maintain them have a responsibility to ensure their residents’ safety – and, as an industry, we need to continue to provide our expert support to ensure the correct specification, installation and ongoing maintenance of fire doors. Raising awareness during Fire Door Safety Week, we hope lives will be saved through a reappraisal of fire doors and safety arrangements in multiple occupancy buildings.”

There’s heightened concern over care homes due to the extremely vulnerable nature of the residents, most of whom are elderly and have poor mobility or eyesight or may be drowsy because of medication.

Assistant London Fire Brigade Commissioner Dan Daly said: “Earlier this year, we found that of 177 care homes inspected in London, a third had inadequate or poorly maintained fire doors. These are one of a number of measures that need to be in place to help keep people safe from fire. We would urge all care home providers to ensure that they have a proper and up-to-date fire risk assessment and ensure they know what to do in the event of a fire to help protect some of London’s most vulnerable residents.”

Numerous events and campaign activities are being held throughout this year’s Fire Door Safety Week, which is supported by a number of agencies including the Home Office’s national Fire Safety campaign and the National Fire Chiefs’ Council.

A free toolkit of resources is available to help landlords, tenants and anyone with an interest in or responsibility for fire safety at a property. Fire Door Safety Week also sees the launch of a hard-hitting video underlining the powerlessness of tenants and residents to protect themselves from fire if those responsible fail to take action over fire safety.

Brand new for this year’s campaign is an interactive mock criminal trial aimed at providing the manufacturers of fire safety products, consultants, contractors, designers, installers and other potential duty holders with an insight into where they may be liable in the event of a fire incident.

Helen Hewitt concluded: “Every year, Fire Door Safety Week raises awareness and helps save lives. We need to root out fire doors that are ill-fitted, damaged or poorly maintained and ensure that all buildings are equipped with fire doors that are fit for purpose. Tenants and residents alike need to have confidence in them and have clear guidance about fire safety plans and measures. They must also be able to report concerns that are then actioned. The time has come for all parties to fully play their part in the critical matter of fire safety.”