The Incentive FM Group Forum: ‘Can we save the security industry from itself?’ 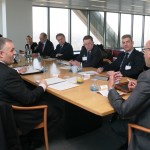 This year’s Incentive FM Group Forum addressed the issue of margin erosion in the UK’s contract security industry, asking whether this is having a detrimental effect on the safety of client’s buildings and people, not to mention the viability of the security industry at large.

Attendees at the event – which was held at Heron Tower in London’s Bishopsgate on Wednesday 18 February – also examined what might be done to address the commodity pricing approach and whether the industry is selling itself short by broking labour as opposed to defeating risks.

Is there a way of setting a new standard and options for a better way of working?

Jeremy Waud, Chairman at the Incentive FM Group, chaired the event and started by obtaining a consensus from the group that the low margins which are now the norm in the sector make it extremely difficult for security companies to survive. However, the group was split over the issue of whether prices have finally bottomed out with some seeing a slight upturn in recent months. 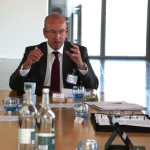 Chris Wisely, managing director at Axis Security, commented: “Margins have been falling for many years. More recently, though, this situation has been exacerbated by the economic downturn. While it remains a clear challenge for businesses within the sector to generate margin improvement, we now feel that it’s acceptable to some of the more discerning customers to pay more where a higher quality service can be evidenced.”

It was agreed at the meeting that the margins issue isn’t being helped by the large Total Facilities Management companies who are often offering security solutions with an extremely low (or zero) margin such that they can obtain work around other elements of the host organisation’s operation – such as M&E – which attract a much higher margin.

“This is very predatory behaviour and results in the smaller firms being knocked out of the equation,” commented Jeremy Waud.

Members of the group felt strongly about what’s at the very heart of the challenge. This is that, all-too-frequently, customers simply do not understand what they’re buying. On that basis, the industry needs to work harder at educating its customer base. Attendees suggested that existing trade bodies have failed to assist in this regard and that there’s little confidence they’ll do so in the future. 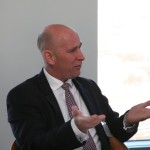 Steve Hall of Ultimate Security asserted: “The various trade bodies have lost their way. I’m not sure how they can turn it around. They need to show what they can do.”

Key members of the group felt that lack of differentiation between companies and what they are offering is also something that needs to be addressed and, moreover, that added value niche services ought to be considered.

Emprise’s Paul Harvey stated: “The security industry is partly to blame for its troubles. There’s no clear differentiation in the service and, in the absence of anything else, clients will buy on price. There’s too much of a victim culture in the industry. We need to step up and show where we can add value.”

The entire group was united in the belief that the industry needs to attract more good people or otherwise train the existing ones to enable them to drive through these changes. Attendees acknowledged that this is a difficult task when set against the backdrop of falling margins. However, it was felt that a key account management approach would help to drive the education process. 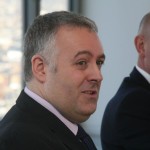 Simon Chapman of Lodge Service explained: “The longevity of our relationships with retail customers has, at least to some extent, helped us in maintaining good margins. As we truly understand their business it’s easier for us to deliver and demonstrate value to the client.”

Agreement on a Best of Breed solution

Attendees concluded the morning’s discussions by brainstorming the idea of bringing together a number of security businesses and agreeing on a high standard service offering – a Best of Breed solution – that can be offered to clients.

It was agreed that this is an exciting development but, to be successful, would need marketing in order to raise awareness.

Plans were then made for the group to meet next month in order to discuss this matter further along with innovative pricing solutions. In due course, key clients will be invited to critique the output plans.

Security industry strategist Bobby Logue opined: “The time is right to stop skirting around these issues and address them. We need to re-engineer the way that we sell security in order to deliver better value for the customer.”

Chris Kenneally, CEO at Cordant Services, added: “The battle ahead is margin versus value. Many customers only understand cost. We need to change that situation.”