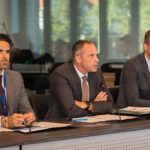 On Tuesday 2 July, the Joint Liaison Task Force on Migrant Smuggling and Trafficking in Human Beings (JLT-MS) was launched at Europol. This new operational platform will allow liaison officers from all EU Member States to step up the fight against constantly adapting criminal networks.

The new Task Force, co-ordinated by Europol’s European Migrant Smuggling Centre, will focus on intelligence-led and co-ordinated action against criminal networks involved in migrant smuggling and the trafficking of human beings. Liaison officers from all EU Member States and potentially operational co-operation partners will work even closer together to identify networks and prioritise, prepare and execute cross-border operations.

The JLT-MS will increase the support mechanism already available in the EMSC, including analytical capabilities and tools, such as the Joint Operational Team MARE and its Information Clearing House. The Task Force will also provide a joint platform for direct contact and better co-ordination and co-operation between law enforcement authorities.

The JLT-MS platform will facilitate the joint development of stronger operational strategies which will help disrupt international criminal networks even more efficiently. The Task Force will enable the support and investigation of an increased number of high priority cases. JLT-MS operational joint activities will focus on the identification and further investigation of high value targets.

Additionally, the new operational platform offers an opportunity to target the proceeds of crime. In addition to the investigation of migrant smuggling and trafficking in human beings, this strengthened coordinated approach will enable considerably the increase and effectiveness of parallel financial investigations, in particular money laundering and asset recovery.