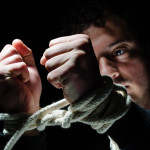 Europol has supported British and Slovak law enforcement authorities in dismantling a large organised crime group believed to have been involved in human trafficking. Based in the UK and Slovakia, the criminal gang is suspected of people trafficking – including children – for proposed exploitation in forced labour and social benefit fraud.

During a co-ordinated Day of Action, 14 house searches were conducted, 50 potential victims of trafficking were safeguarded and 24 suspects arrested.

Members of the organised crime group allegedly recruited significant numbers of Slovak nationals using promises of well-paid jobs in the UK. The victims were subsequently trafficked to these shores.

UK authorities initiated the investigation after receiving intelligence on an extensive labour exploitation network from the Human Anti-Trafficking Unit of the Slovak National Department for Combating Illegal Migration. This initial enquiry launched more than ten linked investigations in different areas of the UK. These were managed by regional police teams reporting directly to the National Crime Agency.

Europol provided support throughout the investigation by analysing intelligence, organising operational meetings and facilitating the exchange of information between the British and Slovak authorities.

On the Day of Action, Europol deployed mobile officers and forensic analysis tools to cross-check data in real time. Support from Europol and the Slovak authorities was assessed as being critical to the success of this operation.

Cambridgeshire Police and the East Regional Special Operations Unit (ERSOU) were responsible for carrying out 13 arrests while the National Crime Agency made one arrest in the Leicestershire area.

Speaking about the targeted operation, Caroline Young (deputy director of the National Crime Agency’s Organised Crime Command) said: “This co-ordinated activity highlights close collaboration realised between the National Crime Agency, local police forces, the Gangmasters Licencing Authority, Regional Organised Crime Units and our international partners, Europol and the Slovak police, to investigate suspected labour exploitation and human trafficking within the UK. These close working relationships help us to tackle the organised crime groups who think they can exploit people for profit. We’ll continue to work together, sharing intelligence and knowledge such that we can hold offenders to account and safeguard victims.”

Europol’s deputy director of operations, Wil van Gemert, added: ‘This action sends the clear message that Europol and its partners are determined to pursue criminals involved in human trafficking. Europol strongly supports EU Member States’ investigations in this area, and we will continue our efforts in fighting this crime. Forced labour and human trafficking violate the Human Rights and dignity of millions of people. By working together, and promoting fast and effective international law enforcement co-operation, we can eradicate this form of modern slavery.”

A yacht carrying more than two tonnes of cocaine to Europe has been intercepted in the Caribbean in a joint operation involving the National Crime Agency working alongside French and Spanish partners.

The SY Silandra was boarded by officers from the French Customs Coastguard 125 miles off Martinique on Wednesday 15 April. The vessel was about to begin a trans-Atlantic crossing.

The three crew members – two Spanish and one Venezuelan – were arrested and are now in custody on Martinique.

The boat was stuffed with 80 bales of cocaine weighing a total of 2.2 tonnes. It’s believed to be one of the biggest ever seizures made by the French authorities. If cut and sold in the UK, the haul would have had a likely potential street value in excess of £300 million.

Steve Reynolds, head of international operations for the National Crime Agency, said: “This was a huge seizure and represents a major blow to the organised crime groups involved in shipping Class A drugs from South America and the Caribbean to Europe. Our network of officers overseas played a crucial role in this operation. It’s highly likely that at least some of these drugs would have ended up being sold on the streets of the UK.”

The seizure is the latest involving the National Crime Agency to take place in the region. In November 2014, a UK-bound yacht carrying an estimated 250 kilos of cocaine was seized off Martinique in another joint operation. Two men from Jersey were later jailed for a total of 17 years.