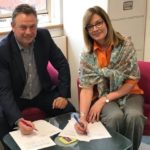 Tony Porter and Elizabeth Denham sign the Memorandum of Understanding

Surveillance Camera Commissioner Tony Porter QPM LLB and Elizabeth Denham, the Information Commissioner, have published a revised Memorandum of Understanding (MoU). The MoU is a statement of intent that has at its heart the protection of the fundamental rights and freedoms of citizens in respect of their privacy, the protection of their personal information and also the public interest which arises when balancing those considerations against a legitimate duty to protect communities where it’s deemed necessary to do so.

The MoU clearly sets out a framework for co-operation, co-ordínation and information sharing between the Surveillance Camera Commissioner and the lnformation Commissioner in connection with the sharing of relevant information and the delivery of their statutory functions where it’s considered by the Commissioners to be in the public interest for them to do so.

Tony Porter stated: “I’m delighted to publish this revised Memorandum of Understanding with Elizabeth which sees another deliverable of the National Surveillance Camera Strategy for England and Wales being met. It sets out the roles of each of our offices and practical working level arrangements between us. Given the way in which surveillance cameras can now collect and manipulate personal data, it’s extremely important that we have a framework in place to bolster our excellent working relationship. With the changes in data protection legislation coming in next year due to the EU’s all-new General Data Protection Regulation this is something that’s very much in the public interest.”

These free Workshops are targeted at local authorities, CCTV managers, compliance officers, data protection officers, community safety managers and operating officers. All are invited to register for one of these events, as is anyone else who has responsibility for all forms of surveillance including CCTV, body-worn video, ANPR and UAVs.

There will be a keen focus on the importance of the self-assessment tool, third party certification, single points of contact and developing registers of all surveillance systems used within local authorities. A detailed agenda for each day will be made available nearer the time.

The full list of Workshops with venues and timings is as follows:

Repeal Bill “must be urgently amended”

Liberty and Amnesty International are calling on MPs to add a People’s Clause to the Great Repeal Bill to stop ministers from stripping away vital rights protections as they rewrite UK laws after Brexit.

The Bill, which is back in the House of Commons today (Thursday 7 September), grants Government ministers unprecedented and incredibly broad powers to alter our laws without the usual Parliamentary scrutiny. According to Liberty, there’s no formal commitment anywhere in the Bill’s 66 pages that important rights and equality protections stemming from EU membership will be maintained in UK law post-Brexit. Instead, it takes away ordinary people’s ability to rely on those protections in UK courts.

Amnesty and Liberty are now calling on MPs to amend the Bill to include a binding commitment on the Government to prevent it from eroding rights.

Corey Stoughton, advocacy director at Liberty, said: “This law will affect everybody in the UK for generations to come. Ministers saying ‘trust us’ just isn’t enough when the stakes are this high. Surely the Government cannot oppose one simple amendment to stop them taking away our rights? We need a formal commitment – a People’s Clause – in the text of the Great Repeal Bill that guarantees we’ll bring home all the fundamental rights we had before Brexit. People voted to leave the EU, not to lose their rights.”