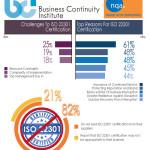 Infographic highlighting the main points outlined in the BCI’s report

A new report published by the Business Continuity Institute (BCI) and supported by certification body NQA has shown that six out of every ten organisations surveyed adopt ISO 22301, the international standard for business continuity management. According to the report’s findings, those organisations with strong top management commitment to standardising business continuity practice are four times more likely to adopt ISO 22301 than those who do not.

There are many reasons why an organisation would want to embrace ISO 22301, most notably the fact that it provides assurance of continued service. Indeed, 61% of respondents identified this as a significant reason.

By certifying to ISO 22301, organisations can provide reassurances to their stakeholders that, in the event of a crisis scenario, they will still be able to function as normal.

Other reasons noted include the following:

However, there are barriers that can prevent such commitment. Those identified in the report are resource constraints (25%), complexity of implementation (19%) and top management buy-in (18%).

Encouragingly, these barriers each exhibit relatively low percentages among respondents suggesting that they’re not so widespread.

The BCI comments: “If reassurance is one of the primary reasons to commit to ISO 22301 then one can only wonder why many organisations don’t expect the same of their suppliers as supply chains can only be as strong as their weakest link.”

Some industry commentators might consider it alarming that 82% of respondents to the survey stated their organisations don’t seek certification to ISO 22301 from their suppliers.

Reviewing the survey results, Deborah Higgins MBCI (head of learning and development at the BCI) commented: “It’s encouraging that the uptake of ISO 22301 is beginning to increase as organisations recognise the value of investing in an effective business continuity programme. However, there’s still much work to be done, most notably when it comes to persuading other organisations whom they work with across the supply chain to adopt ISO 22301.”

Kevan Parker, head of the NQA, added: “ISO 22301 provides an excellent framework for building organisational resilience. The benefits of its adoption are becoming increasingly recognised. This is very positive but, as highlighted, a supply chain is only as strong as the weakest link within it. It’s a responsibility of those with ISO 22301 certification to lead their peers towards adoption and elevate organisational resilience to a state of total supply chain resilience.”

Businesses are aware that they need to exercise their business continuity plans. It’s the only way to find out whether they will work. Of course that’s with the exception of a live incident, but in the midst of a disaster scenario is never the best time to find out that your plan doesn’t work.

These are all important questions and are all vital to ensuring that you have an effective business continuity programme in place. One that will provide reassurances for top management that, in the event of a crisis, the organisation will be able to deal with it.

With this in mind, the BCI has published a new guide that will assist those who have responsibility for business continuity to manage their exercise programme.

The BCI’s Guide to Exercising Your Business Continuity Plan explains what the main types of exercises are and in what situation it would be appropriate to use them. The document also outlines how to plan an exercise and what needs to be considered when doing so, from the setting of objectives through to conducting a debrief and establishing whether or not those objectives have been met.

A recent study showed that nearly half of respondents to a survey had not tested their plans over the previous year while half of those had no plans to do so over the next twelve months.

This BCI document is intended to make it easier for people to develop an exercise programme and demonstrate that it doesn’t have to be an onerous task to do so.