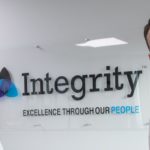 James Chittil (left) and Will Adams

One of the West Midlands’ fastest-growing independent security businesses is celebrating its 10th Anniversary in style by securing a clutch of new contracts. The Integrity Security Group, which was formed by local entrepreneur and managing director Will Adams, has seen its dedicated approach to customer service and the ongoing development of its staff pay off, with over £100,000 of recent contract wins including work for the Imperial Retail Park, the Grand Hotel, Umberslade and Alliance Scaffolding.

The Solihull-based company has seen turnover grow from just £50,000 in its first year of operation to in excess of £3 million for the last 12 months. The workforce has risen from just seven people to over 100 employees.

“It has been a real whirlwind ten years that’s for sure, and the pace of growth doesn’t look like letting up just yet,” explained Adams to Risk Xtra. “I had worked in the security industry for some time and witnessed how other firms had poor staff retention and were continually letting their customers down. The idea was to change all of this and the only way to do that was by starting a business myself. Integrity was duly formed.”

Adams continued: “Originally, we leased a start-up unit from Solihull Metropolitan Borough Council and managed to gain our first client, the Association of Plumbing and Heating Contractors. The Association signed up quickly. As is the case with all new ventures there have been many challenges to overcome, but we’ve done just that and, with ten years under our belts, we have more exciting plans to develop our service offer and expand the business.”

James Chittil, general manager of Integrity Security Group, added: “Our independence is one of our biggest strengths as it means that we can act quickly to changes in the marketplace and customer demand. Over the last decade, this has seen us acquire Roscot Security and open two additional offices in Aldridge and in Letchworth Garden City to meet a growing client base in the South East. More recently, we’ve invested in a 24-hour CCTV Control Room as an increasing number of contracts are requesting electronic security, such as CCTV, alarms and access controls.”

Integrity Security Group holds a number of industry accreditations, including Safe Contractor, CHAS, Principal Member Status of the British Security Industry Association and Security Industry Authority Approved Contractor status. In addition, the company is ISO 9001 and ISO 14001 accredited, with an impressive track record of zero major or minor non-conformances for the past eight years.