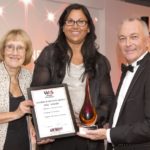 Yasmeen Stratton, director of global security recruitment consultant SSR Personnel, has become the fifth recipient of the prestigious Women in Security Award for ‘Contribution to the Security Industry’. This year’s nominees also included Baroness Angela Harris (Liberal Democrat Life Peer who was given the ASIS UK Mervyn David Award in 2012 for her services to the security profession) and Dr Alison Wakefield BA (Hons) MPhil, senior lecturer in security risk management at the University of Portsmouth.

A Fellow of the Institute of Recruitment Professionals, Stratton has managed successful teams of recruiters operating within the international corporate security environment since 1996. Stratton’s experienced in operating to a strategic level, managing multi-skilled projects in diverse arenas and, at an operational level, co-ordinates significant numbers of recruitment initiatives including Executive Search and Advertised Selection for FTSE 100 and Fortune 500 businesses.

In addition, Stratton is BPS-trained to administer psychometric tests to both levels A and B.

Stratton is a Freeman of The City of London and a Liveryman of The Worshipful Company of Security Professionals, and has been an active Fundraising Committee member for the latter since 2010.  In 2014, Stratton became the financial sponsor of The Worshipful Company’s Apprentice Scheme for 2014-2017, and currently holds the role of Apprentice Master to a young apprentice.

For nine years now, Stratton has served on the Executive Committee of the OSAC London Country Council, the corporate interface with the US Government which has been a significant operation in recent years both internationally and on the domestic front.

As secretary to the Private Sector Co-Chair and RSO, Stratton is trusted to extend and support the business goals of OSAC. Stratton is the key co-ordinator for OSAC London events, preparing seminars and conferences, engaging with eminent speakers, venues and the membership as well as managing regular council meetings in the UK.

Engaging with partner organisations and attending overseas OSAC meetings, such as those taking place in Washington, Jordan, Singapore and Bulgaria are other key parts of this role.

Involvement with ASIS UK and The Security Institute

A member of ASIS UK, Stratton represents SSR Personnel at ASIS International events as a recruitment partner, annually attending the Middle East Conference in Dubai and the European events. In the UK, she regularly attends London-based Workshops and seminars through a number of business and security associations including the Risk and Security Management Forum, SASIG, WISE, AURORA, the WIS Group, the Women’s Fraud Network and as a member of The Security Institute.

Specific interests for Stratton include international terrorism, crisis management and the development and coaching of emerging leaders in the international security environment.

Stratton is an active supporter of Embrace, the CVOC charity that served as the nominated charity for the 2016 SSR Personnel Charity Golf Day, helping to raise over £5,000. Other charities actively supported by Stratton include PTSD Resolution and Cancer Research UK.

Women in Security Awards: the background

Professional Security’s Women in Security Awards were initiated back in 2012 to celebrate and recognise the accomplishments, value and contributions women make within the private security industry and, indeed, the wider security community.

The Security Industry Authority (SIA) is a keen supporter of the Women in Security Awards. As the industry’s Regulator, the SIA is committed to equality and diversity within the private security business sector. Research conducted by the SIA back in April 2015, which looked at gender and other protected characteristics, revealed that only 9% of the SIA’s licence holders are female.

Elizabeth France, chair of the SIA and a member of the 2016 Judging Panel, said: “Many congratulations to the winners and all the nominees. This is a great annual event which truly celebrates the important contribution and role women play in the security industry. The success of the nominees is significant because it shows how women can succeed at every level, from manager roles to front line officers. Women in the private security industry and those nominated are positive role models.”