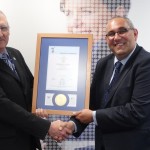 Sodexo – the world’s largest services company with over 420,000 employees – has gained further recognition of its commitment to employee safety and security by seeking independent certification of its Control Room services from the National Security Inspectorate (NSI).

As one of the UK’s premier certification bodies for the security and fire sectors, the NSI has robustly assessed the facilities and procedures of Sodexo’s national Control Room against the relevant industry standards BS 7499:2013, BS 7858:2012, BS EN ISO 9001:2008 and its own Code of Practice, namely NSI NCP 107.

Opened last year and based in Salford, Sodexo’s national Control Room monitors 600 employees (including permanent and relief security officers) across 260 contracts in the UK and Ireland on a round-the-clock basis. Many of Sodexo’s officers provide security solutions for the company’s clients out of hours or in lone worker situations. NSI Guarding Gold approval provides reassurance to these officers when on duty that they have the appropriate back-up in place from the Control Room should this be required.

Simon Pears, Sodexo’s global security director, explained: “NSI Guarding Gold is one of the highest accreditations in the security sector signifying the standards to which we operate and how important people are to our business. Sodexo has been extremely successful in providing clients with professional security services and is ranked in the Top 1% of security providers for quality delivery in the UK. Achieving the Guarding Gold standard serves to consolidate this position and is a tremendous recognition for the Control Room team.”

Richard Jenkins, the NSI’s CEO, stated: “Sodexo is a shining example of what can be achieved when an organisation puts people at the heart of its business. I’m delighted Sodexo sought independent verification of the facilities and procedures of its national Control Room from the NSI. NSI Guarding Gold approval demonstrates commitment to employee welfare through the adherence to sector standards and business excellence and by dint of the sound operation of a Quality Management System to ISO 9001. Certification is a credit to all involved at Sodexo in the Control Room operation and the overseeing of its on-site services for security officers.”

End users who choose to contract NSI approved companies can be assured of security and fire safety services delivered to the highest standards by businesses committed to quality.

With a national network of fully-qualified auditors specialising in security and fire audits, the NSI robustly audits its approved companies to verify compliance with relevant British and European Standards, Codes of Practice and certification schemes developed by industry bodies and counts the UK’s leading security and fire safety providers among its client base.

Installation of Security Systems: How does it work for you?