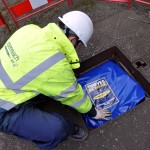 Crime-fighting specialist SmartWater Technology has unveiled SEAL – the company’s newly-launched crime prevention device that has been specifically developed to restrict access to underground networks and other critical infrastructures that can be the target of metal thieves.

SEAL consists of two key components: an extendable steel brace (which prevents intrusion) and a bespoke mouldable bag customised to fit almost any shape or size required by the client.

The UK-manufactured bags are fitted with forensically-coded and patented SmartWater SmartGel which is uniquely registered to the location of the device’s deployment.

BT Group business Openreach has become the first organisation in the UK to deploy SEAL after initially approaching SmartWater about developing a product that would combat underground infrastructure theft. Devices are now in use at high-risk locations, none of which have been attacked since their installation.

Bernie Auguste, general manager of security services for Openreach, told Risk UK: “Ensuring that our customers don’t suffer from any loss of service is obviously of paramount importance to us. SEAL is another tool to help us achieve this aim. A key benefit of SEAL for Openreach is the rapid deployment capability. We provide SEAL at key points in our infrastructure where we have an emerging or potential threat. Our aim is to significantly reduce the likelihood of a criminal attack. SEAL will undoubtedly help us until a longer term security solution can be actioned.” 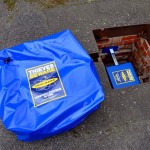 SEAL consists of two components: an extendable steel brace (which prevents intrusion) and a bespoke, mouldable bag customised to fit almost any shape or size required

Phil Cleary, CEO at SmartWater, added: “The development of SEAL underlines our commitment to innovative thinking and our determination to help clients overcome the crime-related challenges they face. We believe SEAL has a global application. Indeed, it’s already attracting attention in a number of overseas territories.”

SEAL: how does it work?

The theft of underground metal and cable can result in the loss of vital services such as telephone and broadband connections, in turn realising inconvenience for the general public and, potentially at least, affecting entire communities.

Such theft can also result in major financial losses for service providers who have a responsibility to repair and restore their solutions on behalf of the customer base.

In the event of a criminal attack on SEAL, the mouldable bag will rupture, covering tools, clothes and hands in uniquely-coded and patented SmartGel. Any traces of the gel will glow brightly under ultraviolet (UV) light, providing a unique forensic link between the criminal and the crime scene.

The gel will remain on skin and hair for many weeks after an incident and is virtually impossible to remove from clothing, footwear and tools. 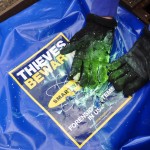 In the event of a criminal attack on SEAL, the mouldable bag will rupture, covering tools, clothes and hands in uniquely-coded, patented SmartGel

Should a manhole cover be removed illegally, then, SEAL will protect the site from opportunistic thieves looking to target underground cabling and infrastructure. As a by-product, it can also act as a temporary Health and Safety measure to reduce the risk of injury to members of the public while a replacement manhole cover is sourced.

Having aided hundreds of criminal convictions while maintaining a 100% conviction rate in court, SmartWater has been proven as one of the most powerful crime deterrents in the UK.

SmartWater deploys its forensic products tactically within a wider crime-fighting strategy in order to maximise the risk of detection and subsequent accountability among thieves.

Thieves who think they can remove traces of SmartWater from stolen cash have been sent a clear signal of the product’s robustness after Greater Manchester Police arrested a gang of violent robbers whose constituent members are believed to have attempted to remove traces of the forensic liquid by washing banknotes.

Any suspicious items (including irons which may have been used to flatten the washed notes) and clothing were seized and water pipes subsequently examined for traces of the SmartWater-coded dye.

Cashboxes used by certain Cash-in-Transit couriers are fitted with security dye systems that activate if the box is tampered with, covering the notes inside in a permanent staining ink or binding all of them together into a solid block. The dye is laced with a SmartWater forensic code which can be used to identify which cashbox the notes came from. This can help police to link robbers with a specific crime scene and ensure that the appropriate sentence is handed out in court, particularly if the crime involved weapons or acts of violence.

To date, 16 regional police forces have used SmartWater’s forensic laboratories to identify traces of the liquid on stolen cash.

As a direct consequence of SmartWater evidence, more than 250 convictions relating to Cash-in-Transit robberies have been secured since 2008, equating to over 950 years of jail time.

“These latest arrests by Greater Manchester Police demonstrate that criminals believe SmartWater increases their risk of accountability, which is why they were trying to remove it from the stolen cash,” explained Phil Cleary. “However, we only need the tiniest amount of SmartWater to generate a positive identification. No amount of washing will remove every trace of it. The robustness of our product is beyond question, which is why we maintain a 100% conviction rate in court.”