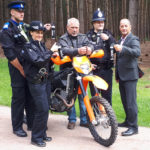 There’s a new weapon in the battle against moped-enabled crime and it’s one which will leave a lasting mark on offenders. SmartTag – a traceable forensic spray developed by Telford-based SmartWater – will see criminals who threaten or attack people or try to escape a crime scene on a moped or motorbike sprayed with the forensic spray from a distance before they escape.

SmartTag was officially launched and demonstrated on Wednesday 5 June in a mock crime scene on Cannock Chase where bosses from SmartWater teamed up with Staffordshire Police chiefs to put SmartTag into action.

The force has had a particular issue with the illegal off-road use of motorcycles and mopeds in the area, and SmartTag allows them to provide an appropriate response. Used in the same way as an aerosol, the responding police officer pulls the safety pin, aims and then sprays the criminal with a unique forensic liquid which links the offender to the crime scene long after the incident has taken place.

Gary Higgins, consultant director of security services at SmartWater, said: “This is the latest effective deterrent perfected by SmartWater which can be used in the ongoing fight against crime. SmartTag is available in two sizes – SmartTag and SmartTag+ – with the latter’s larger capacity allowing the end user to spray for a longer duration. This is particularly useful when tagging a moving target, such as a moped.”

Higgins continued: “The cans dispense a spray stream of uniquely coded liquid to accurately and forensically tag offenders up to eight to ten metres away. It’s invisible to the naked eye, but glows under UV light. The liquid is near impossible to remove and will remain on skin and hair for weeks or months, even with frequent washing. SmartTag is ideal for police and law enforcement, allowing for the discrete tagging and identification of offenders and reducing the risk of attack for ‘at risk’ people, such as security officers, door supervisors, shopkeepers and hospital staff.” 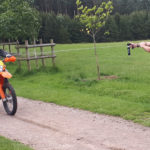 When an arrest is made, SmartWater scientists will analyse traces of SmartWater found on the offender to identify the unique forensic code, linking it back to the crime scene or incident. SmartWater has already been used to jail thousands of criminals and retains a 100% conviction rate in court. Scientists only require a trace that’s the size of a speck of dust to link the offender back to a crime scene.”

Higgins said criminals would not only be deterred by the brand*, but also by high visibility armbands supplied with the SmartTag solution. “The fight against crime is a difficult one, but SmartWater is continually working to provide the best possible support to police forces all over the country in their efforts to deter crime and track and convict offenders. We would like to thank Staffordshire Police for their time and assistance on the launch event and the demonstration. The SmartTag training with the force has already taken place so we look forward to the officers putting SmartTag into action.”

Chief Inspector Sarah Wainwright, commander for the Cannock Chase Neighbourhood Policing Team, observed: “This new partnership is an exciting step forward in our constant efforts to modernise policing and equip officers with the right tools. We hope this new technology will help us to address an ongoing issue of anti-social behaviour in the Cannock Chase area and send a positive message to the local community that we’re doing all we can to address their concerns.”

*An evaluation entitled ‘SmartWater: Offenders’ Perspectives’ conducted by Perpetuity Research and Consultancy International found that 74% of criminals will not commit a crime where the SmartWater brand is on display