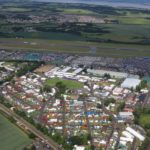 Showsec has been presented with a prestigious opportunity to achieve further growth in Scotland after securing a contract to work with one of Europe’s iconic celebrations of farming, food and rural life. The crowd management and event security specialist will now play a key role in delivering the 177th Royal Highland Show in June when almost 190,000 visitors will make it the biggest event north of the border in 2017.

As well as the prestige of being associated with such a high-profile occasion in the Scottish calendar, it’s an exciting time to work with the Royal Highland Centre as it begins to invest heavily in staging outdoor events.

Showsec has secured an initial one-year contract for the Royal Highland Show, but the potential exists for a three-year extension to the deal.

“The successful tender for the Royal Highland Show is a fantastic achievement for the Scottish regional operation of Showsec,” commented Scott Anderson, the company’s regional manager north of the border. “As Scotland’s largest outdoor event, the Royal Highland Show has a long-standing reputation for both excellence and quality. This is a great opportunity for us to build on our successes in Scotland and provide crowd management expertise to help the Royal Highland Centre develop into Scotland’s premier event destination.”

Anderson will head up Showsec’s delivery of the Royal Highland Show operation between 22-25 June. He’ll be assisted by Gary McGuire as project manager with Tony Hume, Steve Dyker and Andy Hamilton forming the basis of the operational delivery team.

In showcasing top quality livestock, exceptional food and drink and rural living at its most vibrant, the Royal Highland Show attracts 1,000 exhibitors and 4,500 head of livestock on an annual basis. More recently, music has also become a prominent feature with over 50 bands and musical groups playing on the two bandstands on the site. These have included school and rock bands, as well as Her Majesty’s Royal Marines and pipe and drum bands, in turn providing variety to suit all musical tastes.

Inaugural Above and Beyond Award

Showsec’s ongoing commitment to delivering the highest-possible standards of customer service has been reinforced with the announcement of the first annual winner of an accolade designed to acclaim members of staff who go ‘Above and Beyond’ the call of their normal everyday duties.

Supervisor Don Barrett has been presented with a £250 prize for the care and attention which he showed to a young Adele fan with autism when the Brit Award winner performed in concert at Manchester Arena earlier this year. 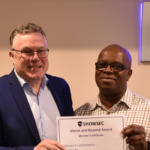 The crowd management and event security specialist launched the new award to provide reward and recognition for the outstanding contributions made by its workforce members across a wide range of events throughout the UK.

Within the past few months, Showsec has received praise for its role at both Manchester Arena and the First Direct Arena in Leeds, with excellent social media reviews from customers focusing on the levels of service provided.

“The new award is worthy recognition for Don because this glowing example of his caring and conscientious approach reflects the high standards he has consistently delivered for a long time,” said Mark Harding, Showsec’s managing director. “What’s so pleasing about the introduction of the award is that it has highlighted the tremendous professionalism and dedication of so many members of our staff.”

Harding added: “There were many excellent contenders, initially at each stage of shortlisting the nominees and then when it came to selecting an overall winner. As a company, we’re constantly looking at ways in which we can raise the bar in terms of the delivery of our product, so we hope the initial recognition which Don and the other nominees have received will encourage even more of our staff members to go ‘Above and Beyond’.”

Barrett came to the rescue of the Gotobed family when they became concerned that their daughter Hannah would not be able to stay to see Adele perform at the Manchester Area because she was growing increasingly fraught and restless at sitting in the audience. Weighing up the situation, the long-serving supervisor organised for the family to move to a vacant hospitality suite where they were detached from the crowd.

“We knew that, once Adele sang the first note, Hannah would be captivated,” said Rachel Gotobed, Hannah’s mother. “We will be forever grateful for what Don did for us.”

The nominations were selected from ‘Above and Beyond’ stories submitted for publication in the company’s fortnightly staff newsletter, entitled ‘SHOWtime’. The other two shortlisted nominees were Paula Purnell and Shiv McCarthy-Shaw, both of whom are members of Showsec’s South Coast area team.

Purnell was hailed by residents for the way in which she engaged with them when the Common People Festival was held at South Park in Oxford for the first time, while McCarthy-Shaw was described as a “superstar” by organisers of the America’s Cup World Series in Portsmouth for acting as a ‘one-woman PR machine’ in the hospitality area.