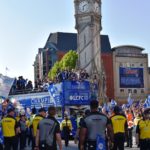 A celebration party every bit as astonishing as Leicester City’s Barclays Premier League title triumph saw an estimated 240,000 people hail the champions, and Showsec played a key role in ensuring it was such a memorable occasion. The crowd management and event security company mounted a massive operation for what was billed as the biggest event in Leicester’s history, and one which certainly exceeded all expectations mainly due to the sheer scale of the turnout.

The size of this ‘party like never before’ was put into perspective by the fact that 35,000 fans turned out to celebrate Leicester City winning the Championship two years ago when Showsec had 150 staff on duty for that victory parade. On this occasion, there were more than 550 staff deployed to cover the open-top bus route from Jubilee Square to Victoria Park where the celebrations were rounded off in style thanks to a surprise performance from the club’s most famous fans, namely rock band Kasabian.

As part of an ongoing partnership with Leicester City Council, Showsec worked closely on the planning and delivery of the event, a process which began to take shape as City moved closer and closer to winning the Premier League due to the fabulous skills displayed all season by players including Jamie Vardy and Riyad Mahrez.

“It was truly incredible,” said Joe Milner, Showsec’s area manager for the East Midlands. “It seemed like the whole of Leicester was having a party. As a company which has its head office in the city, it was an extremely proud moment for us to be a part of another great occasion for Leicester. In the past couple of years, we have worked on City’s promotion parade, security for the Kasabian concert in Victoria Park and the burial of King Richard III. The size of this celebration, though, seemed like all three of those events had been rolled into one big night.”

In conversation with Risk UK, Milner added: “As well as being a true test of our operational delivery skills, the event presented a fantastic opportunity for us to play such a prominent part in an occasion which was beamed live nationally and attracted considerable interest globally as well.”

Showsec drew on its operational experience from those aforementioned past events and having delivered security for victory parades for other football clubs.

Following weeks of planning and preparation with Leicester City Council’s events team, the operation on the day began 12 hours before the start of the parade itself such that everything was in place once the four open-top buses arrived at Jubilee Square.

“There were challenges posed by the size of the turnout, particularly in terms of keeping the parade moving along the route to schedule and the movement of people through the streets of the city centre and then up London Road to Victoria Park,” added Milner. “The successful delivery of the operation was really down to two important factors. They were the good nature of the crowd and the tremendous co-operation between ourselves, Leicester City Council’s events team and Leicestershire Police.”

In conclusion, Milner told Risk UK: “Leicester City’s title triumph was a remarkable team effort, and the success of this fantastic event was the result of another one by everyone involved. We’ve had some excellent feedback that it was an event befitting such an historic occasion for the city and it’s football club.”