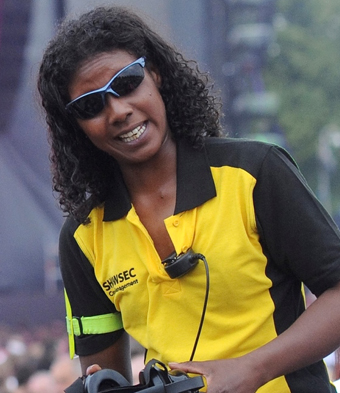 Cherice Wallen – a member of Showsec’s Christmas Market team – has been hailed a life-saving heroine for preventing a young boy from choking to death in Manchester.

Wallen responded swiftly and decisively to a medical emergency in the city centre by administering crucial First Aid treatment when it became apparent the child was in extreme difficulty after an item of food had lodged in his throat.

Although the Emergency Services had been alerted, Wallen decided to act when she noticed the boy turning blue and performed the Heimlich Maneuver to dislodge the piece of food, much to the huge relief of everyone who was present at the scene.

“Cherice’s ability to remain calm in such a terrifying situation and her swift response to the emergency saved a child’s life,” said operations executive David Bradshaw, who’s responsible for overseeing Showsec’s security operation at the market. “The family involved were immensely grateful for her actions and returned later with a gift and a card that simply read: ‘Thanks for saving my life’.”

Bradshaw added: “This course of action was above and beyond the service which we offer, but that’s something Cherice strives for in each shift that she works for Showsec.”

As well as the boy’s parents, Manchester’s Christmas market managers have also presented Wallen with a gift in recognition of her actions.

“I was just doing my job,” said Wallen with typical modesty. “I always try to do my very best to help members of the public. That’s an essential part of the role. The significance of what I had done didn’t really hit me until afterwards when I was back at my position and I saw the parents cuddling the young boy. It was then that I was overcome by the emotion of it all. There were a few tears shed.”

Wallen continued: “At the time, you don’t stop to think about what you’re doing. You just get on with using the skills you’ve developed to deal with the situation in front of you.”

Wallen decided at a very early point in her time with Showsec to go and acquire some First Aid training with St John Ambulance. “This is most definitely one of those occasions when it all seemed worthwhile because you cannot put a price on someone’s life,” said Wallen.

The young boy was given a clean bill of health by the Ambulance Service when they arrived on the scene and was able to continue on his day out.

While the family are hugely indebted to Cherice for her swift and decisive actions, they’ve asked to remain anonymous. Of course, Showsec absolutely respects those wishes.