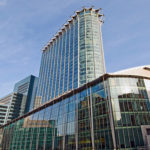 A software security expert is celebrating a decade of protecting the City of London ten years after its iconic video recording and video management software (VMS) was first installed to secure the area. Jay Patel, founder of the SharpView system, first installed the multi-megapixel CCTV solution at CityPoint, 1 Ropemaker Street back in November 2006. This is recognised as being the world’s first deployment of multi-megapixel cameras in a live CCTV application.

Previously known as Britannic House and Britannic Tower, CityPoint was the first building in the City of London to actually exceed the height of St Paul’s Cathedral when it was built back in 1967 as a 122-metre, 35-storeys high bespoke headquarters for British Petroleum. The designers of the iconic structure were F Milton Cashmore and H N W Grosvenor. In 1991, British Petroleum moved back to its original headquarters on Finsbury Circus, which is when the building was renamed Britannic Tower.

The structure was refurbished in 2000 with floor space added and the height increased to 127 metres. The designer on this occasion was Sheppard Robson. The building was then renamed CityPoint.

CityPoint is the seventh-tallest building in the City after the Heron Tower, 122 Leadenhall Street, Tower 42, 30 St Mary Axe, Broadgate Tower and 20 Fenchurch Street, but only the 23rd-tallest in Greater London.

In August 2005 its then owner, Pillar Properties, sold the building for more than £500 million in what was one of the largest deals ever seen in the City’s office market. Ten years ago, the building was again put on the market, this time for £650 million, and duly purchased by Beacon Capital Partners, a private American company. At the time it was the most expensive building sale recorded in the UK.

SharpView was further developed into a full-blown VMS platform when CEO Patel and Francisco Feijoo restructured the company and formed EyeLynx Limited in July 2012. Since then, current generations of EyeLynx systems have been installed at The Shard and Broadgate Tower to provide City of London buildings with state-of-the-art CCTV and video analytics in response to a continuing ‘Severe’ threat level posed by international terrorism.

EyeLynx is now part of the integrated perimeter protection group Zaun, with operational offices in Chessington, Surrey and Zaragoza in Spain. Built-in capabilities for video content analysis and the integration of numerous detection technologies including RADAR mean that SharpView remains one of the highest performance HD megapixel CCTV recording and management systems in the security sector.

“While construction and other markets have been subdued for much of the decade since we created SharpView,” explained Patel, “terrorism and other threats have driven the demand for ever more innovative security measures, which has enabled us to keep ahead, stay busy and grow as a business.”

The RADARs detect moving objects in any weather conditions – even at night – at distances of up to 500 metres away, with minimal false alarms. SharpView provides early warnings of any incidents to security personnel and allows them to verify the potential threat of intruders on protected sites, such as public utility sites, military bases, at national borders, on solar farms, at airports and for large campuses.