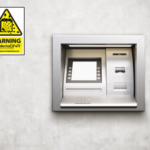 Five men have been jailed for over 45 years after a series of cash machine explosion burglaries. The sentences come after Greater Manchester Police (GMP) officers launched Operation Cass, an investigation into a spate of burglaries targeting ATMs across areas of the North West.

One of the sites targeted was a Post Office at Heaton Moor in Stockport. However, on this occasion, the marking product SelectaDNA Surge was activated, subsequently staining members of the gang with a unique DNA code that stayed on their clothing and allowed them to be identified and linked to the crime by GMP.

The five men – all from the Stockport and Manchester areas – targeted 15 cash machines in Greater Manchester, as well as those in other areas across Cheshire, Yorkshire and Wales.

Lewis Murkin, Philip Clarke, Ryan Wilson and Michael Cash used gas to cause explosions in order to carry out the burglaries, while Martin Goldstraw’s role was to provide logistical support to the organised crime group by moving vehicles and equipment.

The men stole approximately £429,960 between March 2018 and February this year. However, their spree was put to an abrupt end when officers arrested three of the gang as they were attempting to commit another burglary in Oldham. On 18 November, all five men were sentenced for their crimes.

Detective Sergeant Rick Castley of GMP’s Serious and Organised Crime Group said: “During the investigation, clothing seized from the offenders was found to contain SelectaDNA, which was subsequently linked to a specific premises and offence. SelectaDNA evidence proved a significant part of the conspiratorial case against the offenders, which resulted in all five offenders pleading guilty to conspiracy to cause an explosion and conspiracy to commit burglary, which included 15 offences where over £420,000 was stolen. I hope this result sends a clear message to other organised crime groups that we will not tolerate such offending in our communities, and will do all that’s within our power to bring criminals to justice and make Greater Manchester a safer place.”

The men previously pleaded guilty to conspiracy to cause an explosion likely to endanger life or property and conspiracy to commit burglary with intent to steal.

James Brown, managing director of Selectamark (the company which produces SelectaDNA) said: “Officers from Greater Manchester Police have done an excellent job catching and bringing this dangerous criminal gang to justice. We were pleased to be able to assist them by installing our SelectaDNA Surge solution in the Post Office ATM at Heaton Moor, which was activated when the gang struck. Clothing and bank notes were later positively identified by SelectaDNA analysis which linked the gang back to the crime scene. This process played an important part in securing the gang’s lengthy sentences and keeping the public safe.”