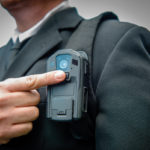 With NHS Protect reporting that assaults on NHS staff in England are up by around 5% year-on-year (67,864 assaults in 2014-2015 versus 70,555 in 2015-2016), NHS Trusts are doing what they can to improve the safety of employees and patients alike. Herman Vermaak explains how body-worn cameras are now ably assisting security personnel.

It seems almost beyond belief that someone could launch an attack on a healthcare professional trying to help people in need, but that’s one very grim reality of Britain in the 21st Century. During 2015-2016, NHS staff in England reported more than 70,000 assaults, equating to 53 instances per 1,000 workers. Staggeringly, criminal sanctions were brought on only 1,740 occasions. Many of our NHS Trusts have simply had enough, and are now turning towards technology to lend them a helping hand with prevention measures.

The use of body-worn cameras is on the rise. Security officers at Guy’s and St Thomas’ in London wear such devices in an effort to halt abuse and violent behaviour from patients. These ‘bodycams’ act as a visible deterrent to those who may be intent on causing harm, and also serve as a trusted source of evidence should any incident occur.

At Guy’s and St Thomas’, staff had seen a surge in violent behaviour, particularly towards nurses and other front line employees. Between April and September last year, a total of 850 incidents were recorded (up 27% on the same period in 2015, when 620 were recorded).

Dame Eileen Sills, chief nurse at Guy’s and St Thomas’, said: “At times, our staff and patients have felt threatened and intimidated by a small number of fellow patients and visitors. We want to send a clear message to people that our staff are here for them. Please let them do their jobs safely. Any unprovoked violence and aggression towards staff is unacceptable. If people do abuse our staff we will take robust action and pursue them through the courts.”

The cameras being used by security personnel only operate when activated, and are therefore not inappropriately recording personal and protected data. Once activated, a light on the camera ensures those being filmed are also aware that recording is taking place.

Jayne King, head of security and site services at Guy’s and St Thomas’, said: “We’ve taken this step to assure our staff of their safety and send a message to people who are violent or abusive on Trust premises that these recordings will be used to bring them to justice.”

The devices employed at Guy’s and St Thomas’ have a tamperproof design, meaning that data cannot be removed from them. The devices cannot be easily destroyed, thereby protecting the chain of evidence.

Any patient or service user information that’s recorded is secure and inaccessible without the relevant software to download the video and audio recordings.

Support from the police

Body-worn cameras are supported by the police. Superintendent Roy Smith of the Metropolitan Police Service explained: “We respond to any assaults on NHS staff very seriously indeed. Body-worn cameras act as an excellent deterrent and provide really good evidence for us to bring offenders to justice. They capture evidence really early on, so the likelihood of us securing a guilty plea at an early stage in proceedings is increasing.”

Smith went on to comment: “If there’s any sort of violence perpetrated, people can see instantly that they’re being recorded on body-worn video. Our experience and evidence suggests this immediately de-escalates a number of situations.”

Body-worn camera technology is also being used at Princess Royal University Hospital in Orpington, Kent. Security manager Len Jeffrey told Risk UK: “My security staff were called to an urgent and violent incident on a ward as a visitor was being abusive towards staff and patients. On seeing security with a body-worn camera, the male immediately calmed down and co-operated, thereby preventing the escalation of his anti-social behaviour”.

The challenges facing 21st Century healthcare professionals are substantial enough in extent without them having to be constantly concerned about their physical well-being. The number of attacks on staff is rising, but the number of those convicted remains low. The application of secure body-worn camera technology can provide vital reassurances and enhance the safety of all those who work in this critically important sector.

A Touch of Retail Security Therapy