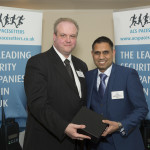 FM Contract Watch introduced the Security Officer of Distinction Awards at last year’s ACS Pacesetters Achievement Awards Ceremony. Due to the large number of excellent nominations received in 2015, the cohort of individual awards was duly increased to 14. The trophies were presented on Wednesday 20 May at the Royal Windsor Racecourse by Brian Sims, Editor of Risk UK, who also gave a Keynote Speech.

Security officers put forward for the 2015 Security Officer of Distinction Awards were nominated by the clients for whom they work, endorsed by the contract security company employing them and, ultimately, selected by a Judging Panel comprised of representatives from the main sponsors of the 2015 ACS Achievement Awards (namely Sutton Specialist Risks, The Security Watchdog, Cobia, Eurotech Monitoring Services, Trust ID and Professional Security). 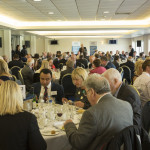 This year’s proud and worthy winners – each of whom was presented with a special trophy by Risk UK’s Editor Brian Sims following citations read by FM Contract Watch partner Terry O’Neil – are as follows: 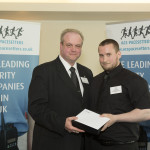 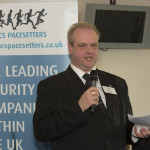 In his Keynote Speech, Brian Sims addressed this year’s winners by stating: “You play a vital role in this country’s safety and prosperity. Every day, there are stories of great heroism from security officers, excellent customer service and a willingness to ‘do the job right’. Be proud of what you do. Be proud of the company uniform that you wear. Be proud of the Security Industry Authority licence card that accompanies you on site whenever you’re on duty.”

Sims continued: “Never be afraid to question. If you feel that security could be better managed on your site then make notes and take them to your supervisor. Further, aspire to become a manager and make your career in the security arena. The path towards a security profession in the UK is underpinned by you… Professional security officers. Without you, there is no security service. Keep on striving to do your best because your efforts are greatly appreciated by us all.”

Addressing the audience for the main ACS Pacesetters Achievement Awards, Terry O’Neil said: “The last 12 months have seen the Approved Contractor Scheme operated by the Regulator reinforce its position as the home of the most reliable contract security companies in the sector. Any organisation voluntarily offering itself up to independent audit by one of the major national UKAS inspection bodies would seem prepared to go the extra mile in continuously trying to improve the security service offered for the ultimate benefit of their clients.” 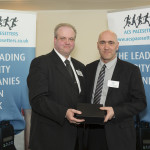 O’Neil went on to state: “There are now almost 800 member companies on the ACS Register. Year on year, most companies appear to improve their audit score and, indeed, this has to be the target for each and every one of them. An even greater incentive awaits the very best companies within the ACS, and that’s the opportunity join the ACS Pacesetters. Membership is only open to those security firms gaining a score that places them in the Top 15% of scores achieved by member companies in a given year. To maintain their membership, those companies must maintain that position every year.”

The Security Watchdog, which is part of Capita plc, presented trophies to Broadland Guarding Services, Corps Security and The Keyholding Company. 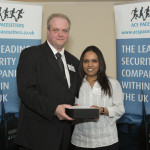 Keynote Address on behalf of Hounds for Heroes

Hounds for Heroes exists to provide specially trained assistance dogs for injured and disabled men and women of the UK’s Armed Forces and Emergency Services. The charity aims to be in existence for the long term, helping not only those injured in current conflicts but also those who sustained injuries during conflicts past or domestic disasters and serious incidents. 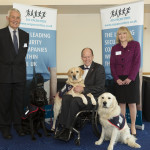 “Disabled veterans of all the services, both military and civilian, often see the idea of having an assistance dog as being a sign of weakness,” outlined Parton. “As a charity, we intend to break that negative image and promote these very special dogs as badges of ability and honour.”

Parton continued: “It’s very difficult to explain to those who haven’t experienced it, but within the services there’s a very special camaraderie built upon trust, loyalty and teamwork. We aim to replicate that by partnering our clients with a Hounds for Heroes assistance dog who will, quite literally, open doors for them to a more active and enabled life.”

First Gold Certificates of Approval for Investigative Services to BS 102000: 2013 issued by NSI