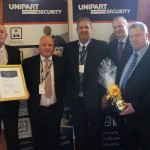 On Wednesday 29 April at Coombe Abbey in Warwickshire, Unipart Security Solutions celebrated the outstanding efforts of its employees – and recognised their valuable contributions to the business and its customer base throughout 2014 – at the Unipart Security Annual Awards Ceremony.

The prestigious 2015 event witnessed a total of 14 awards presented in a range of categories, among them Supervisor of the Year, Manager of the Year and Team of the Year.

There were also several Special Recognition Awards bestowed on the day covering significant achievements in the fields of electronics, resource planning, group security and guarding.

Security Officer of the Year 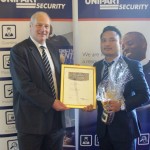 Supervisor of the Year

This category was presented by Andi Hayes (general manager for guarding)

Area Support Officer of the Year

Winner: Muhammed Sajid (Unfortunately, Muhammed could not attend the Awards Ceremony so his colleague Bhim Rai kindly accepted the accolade on his behalf)

Monitoring and Alarm Receiving Centre Operator of the Year

Winner: Mark Radbourne (Unfortunately, Mark could not attend on the day so his colleague Helen McDonald accepted the award on his behalf) 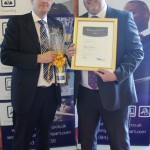 John Gerard Pearse with Manager of the Year Mark Young

Manager of the Year

Team of the Year

As stated, there were a number of Special Recognition Awards presented to reward Unipart Security colleagues for their outstanding efforts throughout 2014. They were as follows: 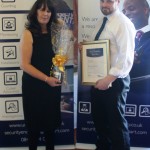 (These awards were presented by Michelle Farrelly, head of Human Resources at Unipart)

(These awards were presented by Andrew Hallam, managing director at Unipart Security Solutions)

Unipart Security also introduced a new category for the 2015 Awards, namely that for Outstanding Act. This was awarded to the Security Team at Magna Park and presented by both Andrew Hallam and John Naughton (sales and marketing director for Unipart Security Solutions).