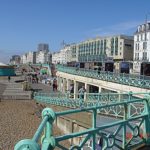 On Friday 30 November, members of the Security Industry Authority’s (SIA) South East Partnerships and Interventions team and Sussex Police officers visited Brighton’s top student pubs and clubs to share Best Practice guidance on safer physical intervention for door supervisors as a reminder of how to keep their clients and, indeed, themselves safe.

The evening of visits aimed to promote the importance of safer restraint and also reduce any potential for violent incidents during the festive season.

The initiative marks the launch of a campaign in Brighton to improve students’ safety during the Christmas party season. The SIA team shared posters and leaflets on ‘Safer Physical Intervention for Door Supervisors’ with three top student pubs. The information bestowed features guidance and illustrations of Best Practice for safer restraint. This is intended as a quick reminder for SIA door supervision licence holders and relates to the training they received in physical intervention.

Kevin Young, the SIA’s regional investigations manager for the South Region, observed that the initiative is a positive way to promote safer working practices at venues likely to encounter violent incidents.

“We want students and young people to have a great night out and go home this Christmas unharmed,” explained Young. “This scenario also ensures the safety of the licensed door supervisors who work at these venues, the majority of whom do a very good job in what can be extremely challenging circumstances.”

This latest initiative has been supported by Sussex Police (Brighton) and the University of Brighton.

In addition, the campaign is seeking to persuade businesses and door supervisors in Brighton’s night-time economy to report incidents to the police such that the SIA can gain an accurate picture of the level of violence that takes place against students and door supervisors.

Pubs and clubs are encouraged to download the poster (copies are available here) and share it with door supervisors in promoting the campaign. Promotion is also advised on Twitter using the following hashtags: #SaferStudents  #Saferrestraint  #PartySafe  #SIALocal.

The National Crime Statistics reveals that victims of assault are usually male (2.1% compared with 1.3% of women) and account for a larger proportion of victims of violence with injury (53% compared with women at 47%) aged between 16 and 24. Incidents of violence are found to increase when alcohol is involved.