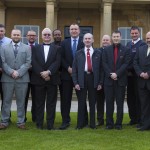 The BSIA’s prestigious Security Personnel Awards serve to reward security officers for their dedication, loyalty, teamwork, customer service skills, their use of technology and also their bravery in the line of duty.

The annual awards are presented both regionally and nationally in five categories: Service to the Customer, Outstanding Act, Best Use of Technology, Best Team and Best Newcomer, with regional winners then put forward to take part in the national round of judging.

One of this year’s regional winners from Securitas is Adam Murphy, a mobile security officer from County Down in Northern Ireland. Murphy was chosen as the Irish regional winner in the Outstanding Act category for his bravery during the early morning hours last September when, while on duty and driving to his next site, he witnessed a violent altercation between two males in the street that involved a deadly weapon.

Instinctively, Murphy positioned his patrol van between the two brawling males involved in order to separate them. After several exchanges of the weapon and its subsequent discarding, Murphy and a member of the public left their respective vehicles to assist the wounded man. That male’s assailant escaped, but Murphy gave chase and managed to restrain the offender shortly afterwards.

Liaison with the Emergency Services

Leeds-based security officers Darren Pounder and Mark Clifton also scooped a well-deserved accolade for their courageous actions and swift handling of a difficult incident at Leeds Bus Station when they were alerted to a young woman who was entering the latter stages of labour having visited the ladies’ toilets.

Pounder and Clifton cornered off the area in order to afford the young female the privacy she needed. Pounder then contacted the Emergency Services to request paramedics and an ambulance while Clifton continued to protect the area by way of ensuring that access to the toilets was duly restricted.

Pounder remained calm and offered support to the mother-to-be while taking instructions from the telephone operator as it was becoming readily apparent medics would not arrive in time to oversee the birth.

An ambulance duly arrived on site just as the woman began to give birth. The paramedics were then able to control the developing situation, in turn successfully delivering the baby.

Along with the other Securitas regional winners, Murphy, Pounder and Clifton now proceed to the national judging phase of the awards (which takes place on Friday 24 April 2015). The prestigious national Security Personnel Awards Ceremony is to be held at the London Hilton Hotel, Park Lane on Wednesday 15 July 2015 as part of the BSIA’s Annual Luncheon.

Commenting on what is a magnificent result for Securitas’ UK operation, Shaun Kennedy (Chief Operating Officer at Securitas in the UK) told Risk UK: “Once again, I’m extremely proud of our security officers. Fifteen awards is an amazing achievement for the company. It’s testament to an ongoing determination aimed at serving our customers over and above our contracted duties. I would like to join the BSIA in paying tribute to our officers’ outstanding work over the past 12 months, and I wish them all the very best of luck for the national judging stage.”

Regional winners from Securitas in 2015

Securitas’ regional winners in the 2015 BSIA Security Personnel Awards are as follows: