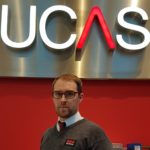 A Securitas Protective Services officer has been commended following an act of bravery when dealing with an incident on a customer site. Matthew Olive, who works at the Universities and Colleges Admissions Service’s (UCAS) Rosehill offices in Cheltenham, combined his fire training with quick thinking when he extinguished an under-bonnet fire in a car belonging to UCAS employee Mark Bentley.

Bentley was approaching the site’s reception access barrier when he noticed smoke and a burning smell emanating from the front of the vehicle. He got out of the car, opened the bonnet and saw that flames had started to spread from the engine compartment.

Olive, whose attention Bentley had attracted through the reception window, recognised the urgency of the situation and extinguished the fire before it could spread to the rest of the vehicle or endanger nearby life or property. He instructed Bentley to keep others at a safe distance from the car while the fire was being extinguished.

Olive’s fire training – received as part of his ongoing training at Securitas – enabled him to select the appropriate fire extinguisher for the hazard and take the right mitigating action. Not only did this enable the fire to be quickly contained, but the car was moved to an isolated location on the site and there was no need for the Emergency Services to be alerted. Access to the site was also uninterrupted.

Subsequently, Olive has now been nominated for an Outstanding Act Award as part of this quarter’s Securitas Community Awards due to his decisive, safe and courageous actions, which clearly reflect the company’s fundamental values of vigilance and helpfulness.

Mark Bentley commented: “I would like to praise Matthew for his quick response and bravery in putting the fire out, as I had no means to do so myself. It was a potentially dangerous situation and his selfless actions ensured that no further damage occurred.”

Dean Griffiths, head of facilities and finance at UCAS, told Risk UK: “Matthew is part of a great team of three officers based at Rosehill. On the day in question, he showed his strengths in thinking quickly and reacting fast. He put the safety of others before his own. His quick thinking certainly helped the situation from spiralling out of control.”

UCAS’ principal function is to run the application process for British universities. It operates as an independent charity, and is funded by fees received from both applicants and higher education institutions.