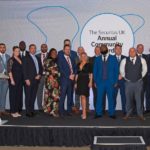 Securitas UK hosted its annual Community Awards on Wednesday 16 October. Now in their tenth year, the Community Awards are specifically designed to recognise the outstanding efforts of Securitas teams and individuals across the last 12 months.

Winners were awarded in ten different categories: Outstanding Act, Leadership, Best Team, Safety First, Innovation, Community, Helpfulness, Vigilance, Integrity and Core Values. This year’s finalists were all quarterly Community Award winners, having been nominated during the year and judged by a panel of Securitas colleagues.

Shaun Kennedy, Country President at Securitas UK, commented: “Many congratulations to this year’s winners and finalists. They’re a credit to both Securitas and the security industry. Every one of them represents the commitment, bravery and passion that drive our six protective services. It’s important that we recognise and celebrate how our officers help make the world a safer place.”

Kennedy added: “I was also delighted to see the National Gallery and Westfield recognised on the night. The Good Customer Award is a significant part of the Community Awards as it acknowledges the importance of collaboration to raise standards and ensure that security is at the very top of the business agenda.”

Kennedy also presented the Country President’s Award. This recognises the outstanding contribution of Securitas colleagues and the team members of a valued client who implemented a pioneering approach to safety and security across the client’s portfolio. The accolade was bestowed upon the Securitas Fire Division in partnership with Aviva.

On the night, Securitas raised £1,700 for charity partner Wooden Spoon. Established in 1983, Wooden Spoon has distributed more than £26 million to over 700 projects, in the process greatly helping over one million disabled and disadvantaged children.