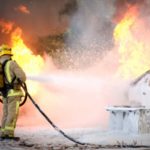 The performance testing of foam system components will be of interest and concern for manufacturers of foam hardware. However, the requirements for the design and installation of foam systems will impact upon all those who specify, supply, install and are responsible for foam systems. On that basis, let’s look to explain the key features and changes to BS EN 13565 Part 2: 2018 and set out the significance – for both existing and future users of foam – of the coming into force of an Amendment to Annex XVII to EU Regulation 1907/2006.

Foam systems are designed to provide a homogeneous layer of bubbles, of aerated firefighting foam concentrate and water, over the surface of flammable liquids (Class B) and/or combustible materials (Class A). The layer of bubbles will suppress the release of flammable vapours, exclude air and cool the fuel and hot surfaces.

As applications for foam systems can be diverse, there’s no one type of foam system prescribed. BS EN 13565 Part 2 sets out the design parameters for commonly used low expansion foam systems. It uses a base application rate adjusted by factors for the EN 1568 foam concentrate performance for both speed of fire extinguishing and burnback resistance and the object being protected. These ‘objects’ include flammable liquid storage tanks, bunds, process areas, loading racks, plastics recycling, aircraft hangars and marine jetties.

In addition, High Expansion Foam (ie Hi-X) is identified for use for total flooding of enclosures containing three-dimensional hazards of either Class A and/or Class B fuels. It’s also suitable for firefighting and vapour suppression on spills of liquefied natural gas. The design basis for all HI-X foam systems set out in BS EN 13565 Part 2 is that the systems are brought into operation swiftly upon the detection of fire.

Foam systems reduce the environmental impact of fire by reducing fire effluent both into the atmosphere and on to the ground. This is achieved through a more efficient application of fire extinguishing agent on to the seat of fire. Compared to other extinguishing systems, the necessary application rate is significantly reduced by using foam systems. Lower fire water damages and a reduced application of contaminated fire water in the environment are also important advantages. Foam extinguishing systems give increased safety for the firefighting personnel and neighbouring communities.

The Amendment of Regulation 1907/2006 concerns the Registration, Evaluation, Authorisation and Restrictions of Chemicals (REACH) concerning perfluoro-octanoic acid (PFOA), its salts and PFOA-related substances. This Regulation puts limits on the amounts of such chemicals that may be present in foam concentrates put on the market after 4 July 2020. This change in legislation has brought about the reformulation of many of the foam concentrates widely used for the protection of critical hazards including aircraft and major fuel stocks.

Fluorine-based foam concentrates are now having chains of perfluorinated carbon atoms limited to six and are thus referred to as ‘C6 Foams’. Foam concentrates which are Fluorine-free are now available on the market and, as with all foams, care is needed to determine the performance effectiveness of such foams. The key point here is that new formulations must not be mixed with ‘old’ formulations as they’re incompatible.

The ‘good news’ is that there’s no requirement in the legislation to limit or prevent the continued use of existing foam stocks, many of which have long storage lives. On existing sites stocks, of existing and new formulation foams will need to be carefully controlled and segregated and their relative firefighting performance matched if re-engineering of the foam systems is to be avoided.

These new C6 Foam formulations have all had to undergo testing to BS EN 1568 to determine their effectiveness, but the limitations in the BS EN 1568 test regime and subsequent testing have highlighted potential issues. The testing only determines the foam performance when aspirated. No testing is done with/for foams used non-aspirated for such applications as foam enhanced sprinkler, deluge and monitor systems which use water type nozzles. Many, but not all, C6 Foams passing the BS EN 1568 tests have subsequently failed fire testing with non-aspirating nozzles.

Historically, this was not the case with the traditional AFFF foams which had proved effective both aspirated and non-aspirated. BS EN 13565 Part 2 has been revised to require engineers to ascertain from the foam manufacturers the tested firefighting performance of any foam concentrate intended for non-aspirated use.

The Fire Industry Association (FIA) has published a Guidance Note entitled ‘What Questions Should An End User Be Asking Their Class B Foam Concentrate Supplier re: PFOA’. The FIA has also published Fact File 87 entitled ‘Fire, the Environment and Foam’.

The new standard has clarified the differentiation between flammable liquid spill hazards and fuel in depth hazards and warned that foam will not provide fire extinguishant for cascading or ‘spray’ fires.

Fixed foam systems remain the only means of extinguishing major flammable liquid fires. The updating of  BS EN 13565 Part 2 enables the fire protection community to apply Best Practice while also taking on board REACH as it affects the next generation of fire-fighting foam concentrates.