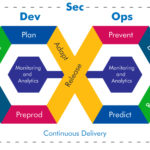 Retailers are putting customers’ data at risk by failing to incorporate proper security controls in their new application development practices. That’s according to the latest research from Claranet. While the majority of retailers have adopted or plan to adopt a DevOps approach to speed up development cycles and improve the customer experience, less than half are completely confident in their ability to integrate security into this approach (also known as DevSecOps).

The research, which was conducted by Vanson Bourne and surveyed 50 IT decision-makers from large retailers, found that DevOps is rapidly taking hold in the sector. 40% of retailers reported having already adopted a DevOps approach, while a further 44% expect to do so this year. Despite this, less than half (42%) have the in-house capabilities to deliver DevSecOps. Just 48% report understanding how to integrate IT security into their DevOps processes.

For Claranet, the results point to a significant disconnect between DevOps capabilities and DevSecOps readiness. This lack of full emphasis on security as part of the DevOps process could lead to data security issues further down the line and put customer data at risk.

Commenting on the research findings, John Hayes-Warren (head of retail at Claranet) said: “Embracing DevOps is clearly a priority for retailers as they look to improve their applications and deliver better and more seamless experiences for their customers. However, the lack of DevSecOps integration shows that security is still regarded as separate from the development lifecycle rather than being factored-in from the start.”

Hayes-Warren continued: “DevOps is a constantly evolving process that embraces innovation and tends to outpace security and compliance, making it increasingly difficult to embed and automate the latest Best Practices into each stage of the development lifecycle. This is supported by the fact that over 50% of retailers don’t feel confident they can deliver DevSecOps, opening the door to leaks of customer data, fraud and cyber attack.”

To support retailers in adopting a DevSecOps approach to app development, Hayes-Warren believes that in-house development teams should be provided with regularly updated security training courses. These should include continuous monitoring and analytics throughout the DevOps lifecycle, whether in planning, coding, pre-production or even decommissioning:

Hayes-Warren concluded: “DevSecOps is a complex process that’s continually changing to respond to new security threats. It’s vital that retailers provide their development teams with suitable training programmes if they hope to build highly secure applications. This will help to ensure all customer data is fully protected across each endpoint.”