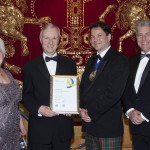 At the annual Burns Night Supper hosted by The Worshipful Company of Security Professionals, which this year was held at The Haberdasher’s Hall in London on Monday 25 January, The Company admitted Paul Miller as its one hundredth Chartered Security Professional (CSyP).

Miller, who’s the managing director at National Monitoring in Timperley, Cheshire commented: “This is a tremendous accolade, and I’m even more delighted to realise that my admission to the Register brings the number of Chartered Security Professionals to the 100 mark. Like many, I thought long and hard before applying to be admitted to the Register. The process of being accepted was challenging to say the least, but that’s only right and also why it’s such an honour to be included.”

The Security Institute’s chairman Garry Evanson, himself a CSyP and a regular assessor on interview panels for new candidates, explained: “Paul and his background is the epitome of what becoming a CSyP is all about. He has been admitted to a list of security professionals who can demonstrate that they’re at the very peak of their profession in terms of both experience and expertise. Now that we’ve reached this milestone, I hope to see an increase in the number of candidates putting themselves forward for consideration.”

The Register of Chartered Security Professionals was launched on 7 June 2011. Established under a special Royal Charter by The Worshipful Company of Security Professionals, the Register itself endorses the main aim of The Company, which is “to promote, support and encourage standards of excellence, integrity and honourable practice in conducting the profession of security practitioners, and also to aid societies and other organisations connected to such a profession.”