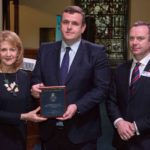 Organised by the Manchester City Centre Crime Prevention Panel (MCCCPP) with the support of Greater Manchester Police (GMP), Manchester City Council and Atmaana Business Consulting, the annual Manchester Security event aims to inform businesses about current issues facing the region and better prepare them to deal with any security challenges that they may face.

Deputy Mayor and Panel Patron Baroness Beverley Hughes opened the event and Assistant Chief Constable (ACC) Russ Jackson QPM from GMP gave an update on counter-terrorism. Baroness Ruth Henig CBE spoke about the contribution and challenges of regulation in the security industry, while other presentations on the day covered city centre policing and the pending introduction of Project Servator.

The event also hosted the presentation of the GMP Business Watch Co-ordinator of the Year Ward which was presented to Joe Mossford, security manager at The Midland Hotel, by ACC Jackson and Baroness Hughes.

Mossford has been with the hotel for 15 years and is also the current chair of the Hotel Security Information Group (HOSIG). He helps to co-ordinate intelligence sharing throughout the Group. Mossford and his team work closely with the police especially, and particularly so when party political conferences take place in the region.

Commenting on Mossford’s award, Superintendent Chris Hill said: “Joe has demonstrated support for his colleagues and other hotels during his leadership as the HOSIG chair in disseminating police requests for information and circulating intelligence, some of which is vital. His support of the police at major events helps to ensure they can run without major issues.”

Commenting on the event, Paul King (chair of the MCCCPP) stated: “Manchester Security affords a fantastic opportunity for like-minded professionals to share Best Practice and help in the provision of a safe and secure future for businesses. I would like to thank event sponsors SecuriGroup and SelectaDNA for their support.”