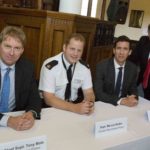 The speakers at Manchester Security 2016

Police and security experts were on hand to provide valuable advice to businesses in the North West as the relaunched Manchester Security event returned to the city on Thursday 29 September. Organised by the Manchester City Centre Crime Prevention Panel with support from Greater Manchester Police, Manchester City Council and Atmaana Business Consulting, the event is designed to impart salient advice such that businesses are able to protect their people and property from potential acts of criminality and terrorism.

This year’s gathering was the best-attended in the event’s history, attracting over 200 delegates, including representatives from well-known city centre retailers, banks and public and private sector organisations alike. 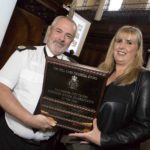 Julie Edwards, operations manager for Selfridges at Manchester’s Exchange Square, was presented with the prestigious GMP Business Crime Co-ordinator of the Year Award by ACC Shewan. Edwards has provided support to crime reduction strategies and operations throughout her 30-year career working in the field of retail security.

Commenting on the award, Chief Inspector Gareth Parkin said: “Julie continues to be a wonderful supporter of local city centre policing, and is always the first to offer assistance around any issues that may arise. Julie’s contribution towards city centre security is unrivalled. The fact that she has won the GMP Business Crime Watch Co-ordinator of the Year Award is thoroughly deserved. I, along with GMP and the Manchester business community, thank Julie for her continued support.”

At the gathering, members of the Manchester City Centre Crime Prevention Panel pledged to continue to fulfil their mission statement of ‘Helping the Police and Supporting the Public’ and will be organising a follow-up event in Spring next year.

Paul King, chairman of the Manchester City Centre Crime Prevention Panel, commented: “We’re only too pleased to help deliver this event for the city of Manchester, and we’re absolutely delighted at the response it has received.”