Not long after Theresa May’s final joust at Prime Minister’s Questions with Labour leader Jeremy Corbyn in the House of Commons on Wednesday 24 July, the newly-crowned Prime Minister Boris Johnson began to assemble the constituent members of his new Cabinet for Government. It soon emerged that Priti Patel, the Conservative MP for Witham in Essex since 2010, has been appointed to the role of Home Secretary with former incumbent Sajid Javid moving to become Chancellor of the Exchequer and succeed Philip Hammond.

Patel served as International Development Secretary from 2016-2017 having initially been involved with the Referendum Party until switching to the Conservatives.

Educated at Keele University and then the University of Essex, Patel’s initial foray into the world of commerce saw her working in PR with the Weber Shandwick consultancy for several years. A desire to move into political circles led to Patel unsuccessfully contesting to lead the Nottingham North constituency at the 2005 General Election.

Patel was elected MP for Witham at the 2010 General Election before being re-elected in both 2015 and 2017. Serving in the David Cameron-led Government, Patel was appointed Minister of State for Employment. 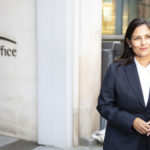 Patel is known to be a Euro sceptic and, indeed, proved to be a leading voice in the Vote Leave campaign during the build-up to the 2016 European Union Referendum.

Patel – who becomes the first woman of ethnic minority descent to hold the office of Home Secretary – supported Theresa May for the Tory leadership when Cameron stepped down, at which juncture May appointed Patel as International Development Secretary.

Assuming the role of Home Secretary on the evening of Wednesday 24 July, Patel spoke outside the Government Department’s headquarters at Marsham Street in central London and stated: “It’s a great honour to be appointed Home Secretary. With this great Office of State comes significant responsibility and I will do everything in my power to keep our country safe and our people secure and also to fight the scourge of crime that we see on our streets. I want to thank my predecessor Sajid Javid for his commitment to the Home Office and law and order. I now look forward to the challenges that lie ahead.”

Is an ARC the Best Way to Manage Critical Alarms?