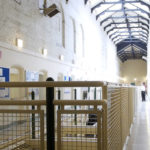 Justice Secretary Elizabeth Truss recently unveiled the “historic” Prisons and Courts Bill, in turn paving the way for the biggest overhaul of prisons in a generation and the delivery of a world-class court system. This key piece of legislation will underpin measures outlined in the recently-published Prison Safety and Reform White Paper, and help in transforming how prisons are run. Prisons will punish people who break the law, but at the same time afford offenders the skills they need to turn their lives around, subsequently driving down the £15 billion annual cost to society of re-offending.

The Prisons and Courts Bill sets in law for the first time that a key purpose of prisons is to reform offenders, as well as punish them for the crimes they’ve committed. Victims and vulnerable witnesses are also central to the new legislation, with a range of measures that will bolster their protection in court.

The Government is giving courts the power to put an end to domestic violence victims being quizzed by their attackers in the family courts, calling time on what the Justice Secretary has described as a “humiliating and appalling” practice. This follows an urgent review commissioned back in January.

Elizabeth Truss said: “Prison is about punishing people who have committed heinous crimes, but it should be a place where offenders are given the opportunity to turn their lives around. I want our prisons to be places of discipline, hard work and self-improvement, where staff are empowered to help people off drugs, improve their English and maths skills and obtain a job on release. Our courts should be places where victims receive the justice they deserve, and where our outstanding independent judiciary can flourish and focus on the cases that matter.”

As stated, the changes announced build on and underpin measures contained in the Prison Safety Reform White Paper, which specifically highlights how the Government will drive reform. Governors will take control of budgets for education, employment and health and they will be held to account for making sure that individuals leave drugs alone and find jobs on release. Data for league tables detailing how prisons are performing in these areas will be made publicly available from October this year.

Across the country, more than 2,000 new senior positions are being created into which valued and experienced officers can be promoted. These posts, which include a focus on specialist mental health training, will command a salary of up to £30,000 per annum.

Prisons and Courts Bill measures relating to the courts underline the Government’s commitment to victims and the most vulnerable, as well as improving the system for those who use it every day. The Government is absolutely determined to make our courts more open and modern.

Key measures within the legislation will make courts swifter, more accessible and easier to use for everyone. They will be efficient and fit-for-purpose, with facilities across the entire estate that are modern and user-friendly and work in favour of dedicated judges and magistrates.

Use of virtual hearings

The use of virtual hearings will be extended, allowing victims to take part without running the risk of coming face-to-face with their assailant(s). Many hearings, such as bail applications, will be resolved via video or telephone conferencing, allowing justice to be delivered more swiftly.

Businesses will be able to recover money much more easily thanks to digital services that allow them to issue and pursue their cases quickly. This will give them vital confidence to do business here, and will enable the world’s leading justice system to remain the international destination of choice for dispute resolution.

Justice minister Sir Oliver Heald said: “Britain has the best justice system in the world, but it should also be the most modern. We have a vision for a justice system that truly works for everyone. Victims and the most vulnerable are at the centre of our changes, which are designed to help deliver swifter and more certain justice for all. We want courts that are efficient and fit-for-purpose, with facilities across the entire estate that are modern and user-friendly.”

UK jails are struggling to cope following a 92% increase in the prison population since 1993, creating an alarmingly dire situation. Most worryingly for the public, perhaps, are prison escapes. There have been 17 successful prison escapes in the decade to 2014-2015, a number that could rise given the current instability. The high-profile escapes perpetrated at HMP Pentonville in November last year are a timely example of the worsening situation.

One of the key aims of the Prisons and Courts Bill, then, is to improve the security of prisons in an attempt to tackle the current crisis.

Cris Francis, head of commercial sales at Jacksons Fencing, commented: “In light of the recent breakouts at HMP Pentonville, adequately securing prison perimeters must be of the utmost importance, in conjunction with the other measures to tackle issues afflicting UK prisons. High security perimeter solutions such as fences and gates must provide enhanced protection in order to give security personnel the time to mount an appropriate response.”