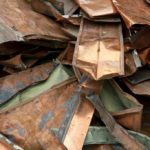 The fight against metal thieves stepped up a gear during the week of 5-9 September after police and heritage experts worked in tandem for the first time to carry out co-ordinated enforcement action. Operation Crucible saw police officers from across the country joined by Historic England representatives to carry out detailed checks on scrap metal dealers.

Thorough checks were carried out by several police forces, including Hertfordshire, Norfolk, Suffolk, Northamptonshire, Leicestershire, Essex and Cambridgeshire as well as the Metropolitan Police Service and the British Transport Police. Officers were joined by colleagues from the UK Border Agency, Her Majesty’s Revenue and Customs, local authorities and Trading Standards.

Chief constable Paul Crowther, the National Police Chiefs’ Council lead for heritage crime, told Risk UK: “Most scrap metal dealers operate law-abiding businesses. However, we believe there are a minority who continue to flout the law on cashless trading and still pay cash in exchange for scrap metal. This means that legitimate scrap metal dealers are disadvantaged, with the actions of a minority giving the industry a bad name.”

Crowther continued: “Paying or taking cash in exchange for scrap metal has to stop. We’re working with partners across the entire country and throughout the metals recycling industry to target those whom we suspect of flouting the law or operating outside of their licence. We will take action to ensure they comply with the law, and we will absolutely not hesitate to take action against people who accept cash payments.”

In conclusion, Crowther explained: “Our message to criminals who are stealing metal from historic buildings, selling it on and, in the process, devastating local communities is simple… We’re making it harder for you to sell stolen metal and gain from your activities. We will bring you to justice.”

Welcoming the development of Operation Crucible, Mark Harrison (national policing and crime advisor for Historic England) observed: “The value of England’s heritage cannot be judged in pounds and pence. The impact of theft on our historic sites and buildings has far-reaching consequences over and above the financial cost of what has been stolen. Heritage crime comes in many forms. When thieves steal metal from protected sites and buildings such as churches, they are stealing from all of us and damaging something which is often irreplaceable. By working together with law enforcement agencies, we’re maximising our ability to identify those who are attacking our shared cultural heritage and bring them to justice.”

Operation Crucible is backed by the British Metals Recycling Association (BMRA), the trade body for scrap metal dealers, and the Church Buildings Council (CBC) which actively supports over 16,000 cathedral and church buildings of The Church of England.

Robert Fell, the BMRA’s CEO, outlined: “We’ve been pleased to support Operation Crucible and welcome the increased focus on cash-paying yards, which will make it difficult for criminals to dispose of any stolen metal. We hope that a move to consider the legality of both sides of the transaction will act as a real deterrent and reduce the incidence of cash transactions markedly.”

Dr David Knight, senior conservation officer with the CBC, explained: “Theft of lead from church roofs and metal theft from monuments and war memorials is a persistent problem that has become increasingly organised and professional in the past year and more. The impact of this crime on volunteers who look after our church buildings, the communities they serve and our many heritage buildings is immense. The Church of England welcomes Operation Crucible.”

Operation Crucible culminated with a conference in Leicester on Friday 9 September. Hosted by Historic England and Leicestershire Police, the focus for the presentations was on metal theft from historic buildings, and in particular churches.

While Operation Crucible primarily focused its activities on England and Wales, from 1 September a range of law enforcement and other agencies began to enforce a law change in Scotland banning the use of cash when buying or selling scrap metals and at the same time tightening regulations on scrap metal dealers’ record-keeping.