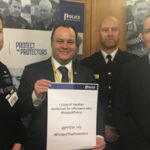 A Bill calling for harsher sentences for those who assault police officers and other Emergency Services workers has cleared its first hurdle at Parliament. Halifax MP Holly Lynch (Labour), who’s determinedly championing the Police Federation’s campaign to ‘Protect The Protectors’, introduced a Ten-Minute Rule Bill in the House of Commons specifically focusing on assaults on Emergency Services staff. The Bill won cross-party support from MPs.

In essence, the new Bill calls for assaults against Emergency Services workers – ‘a constable, firefighter, doctor, paramedic or nurse’ – to become a specific offence. Lynch also called for those offenders who spit at emergency responders to be required to have a blood test and make it an offence if they refuse to submit to one. Emergency responders need to know if they’re at risk of contracting life-threatening diseases.

Lynch spoke about her work with blue light officers including West Midlands Police PCs Mike Bruce and Al O’Shea, who had blood spat in their faces while trying to arrest a violent offender. As the offender refused to give a blood sample, both had to undergo antiviral treatments to reduce their risk of contracting communicable diseases and faced an agonising six-month wait to find out whether the treatment had been successful. During this time, PC O’Shea couldn’t see his brother who was undergoing cancer treatment (because of the risk of passing on an infection), while PC Bruce was understandably reluctant to be close to his wife or children as he feared for their health and well-being should he have contracted a communicable disease.

West Yorkshire Police’s PC Dan McLaughlin, who was assaulted when a man resisting arrest grabbed his radio and used it to repeatedly strike him on the head, was also included in the MP’s speech to Parliament.

All three serving officers lent their support to the Bill and campaign while observing from the public gallery.

Lynch, who cited the Police Federation’s recent Police Welfare Survey during her speech, told MPs: “Behind the uniforms are incredibly brave and dedicated individuals who, regrettably, face risks that they simply should not have to face on an almost daily basis. They routinely go above and beyond the call of their duties to keep the public safe. When someone deliberately sets out to injure or assault an emergency responder, the laws in place must convey how unacceptable that is in the strongest possible terms.”

Disregard for law and order

Addressing concerns over soft sentences, Lynch added: “To assault a police officer is to show a complete disregard for law and order, our shared values and, indeed, democracy itself. That must be reflected in sentencing, particularly for those who are repeat offenders. Many officers described feeling like they had suffered an injustice twice – first at the hands of the offender, and then again in court when sentences were unduly lenient.”

There were cheers in the chamber when Lynch told the House that laws in Australia mean that offenders who spit and refuse to have a blood test can receive a $12,000 (£7,320) fine and a custodial sentence.

Macleod said: “We’re grateful to Holly for giving her support to police officers and other Emergency Services workers who are all-too-often being assaulted in the line of duty. We do not believe that being hit, kicked, spat at or shoved is ‘just part of the job’ and we’re delighted the Bill passed its first reading in Parliament. It was great to see the Bill receive support from all sides of the House. We recognise there’s a lot more work to be done before better protections are in place. However, this is an important first step.”

The Bill will be read for a second time in the House of Commons on Friday 24 March.