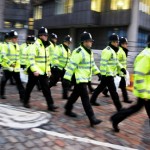 In the face of the 1% public sector pay increase limit set by Chancellor George Osborne and Her Majesty’s Treasury, the Police Federation of England and Wales is now asking for a pay rise of 2.8% for all police officers.

In its second submission to the Police Remuneration Review Body (PRRB) – which is actually a joint submission put together alongside the Police Superintendents’ Association of England and Wales – the Police Federation has asked for an annual uplift in line with the average private sector increase.

Andy Fittes, general secretary who leads on pay issues for the Police Federation, explained: “Since the demise of the Police Negotiating Board back in 2014, we no longer negotiate over pay and allowances. Instead, we have to submit evidence to the PRRB, the members of which are instructed by the Home Office to focus on certain issues including recognition of the public sector pay limit of an average 1% annual increase.”

Fittes continued: “We know from the survey of our members that morale is presently at rock bottom. Coupled with the increased workloads officers have in front of them and the fact that the economy is improving, we have no hesitation in providing evidence that calls for pay increase of 2.8%.”

The PRRB also asked submissions to consider the targeting of pay. “We’re not against change to the pay system and fully recognise that it needs to evolve as the service changes,” urged Fittes. “However, there’s currently no evidenced and defensible system for revising the pay system overall. In the absence of that, we cannot support tinkering around at the edges that could be to the detriment of some officers.”

In its submission, the Police Federation was also asked to make recommendations regarding London and South East weighting allowances. Here, an uplift in line with basic pay is recommended.

With regards to other allowances, the submission makes clear the benefit of having nationally agreed rates of pay in order to facilitate mutual aid and ensure consistent service delivery across all police forces.

All organisations who have submitted evidence are required to publish this on their websites and then there’s a short period of time for review and critique. Following this, involved parties are then called to give oral evidence in March before the PRRB considers its final decision.

The PRRB should make recommendations to Home Secretary Theresa May by the summer in order that any uplift to pay and allowances may be effective from September this year.

*The Police Federation’s submission to the PRRB and additional information can be accessed here: PFEW and PSAEW PRRB Final Submission and at: Home Office Remit Letter November 2015